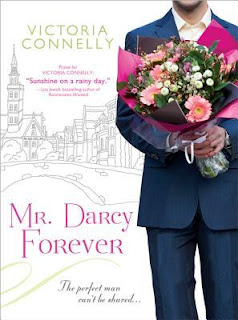 Title by Author: Mr. Darcy Forever by Victoria Connelly
Series (if applicable): Austen Addicts #3
Publisher: Sourcebook Landmark
Publication Date: April 2012
Page Count:  336
Source: netgalley.com
Blurb: The third in a trilogy of Jane Austen romantic comedies from UK author Victoria Connelly featuring characters obsessed with Jane Austen and set in Jane Austen locations (A Weekend with Mr. Darcy, Dreaming of Mr. Darcy). Sarah and Mia Castle, two estranged sisters (and Austen addicts) who have spent a lifetime fighting over the men in their lives, meet for the first time in three years during the annual Jane Austen Festival in Bath, the city where Anne Elliot (Persuasion) and Catherine Morland (Northanger Abbey) found their happy endings. During the festival, the sisters realize that they can't bear to be apart, even though Mia fell in love with the man Sarah eventually married and settled with in beautiful Devon, another Jane Austen location (the filming of Emma Thompson’s Sense & Sensibility). They discover that their sisterhood forms a bond stronger than their mutual connection as Jane Austen addicts. And in true Jane Austen fashion, they each begin to lose their hearts to dashing gentlemen. A beautiful, fun and quirky story of sisterhood and romance.

My Interest in this book is: Loved, loved, LOVED A Weekend with Mr. Darcy, read the second one, and wanted to finish the series.

My Review:
I’m a single mother with no career prospects who hasn’t spoken to her sister in over three years and who, in the Bath Pump Room, managed to slap her ex-lover who, it seems, wants nothing to do with his son.  – Mia Castle

This story is about two sisters who are nine years apart.  When Sarah and Mia’s mother walks out on them, Sarah is left raising Mia.  They share a deep love for everything Jane Austen, and on Mia’s 21st birthday, Sarah had managed to rent ‘Barton Cottage’ from the movie Sense and Sensibility.  It was to be a ‘No Man’ weekend, but that didn’t last long, as Alec was staying down the road from Barton Cottage.  That week that was meant to 'get away and spend time together' ended up driving the two sisters apart for the next three years.  Much had happened in that time period, but neither sister knew what was happening with the other, as they did not speak with one another.

Sarah is an accountant and a sufferer of OCD.  Everything must be in its place or it disturbs her.  Mia is a free spirit who loves to sing and graduated from drama school, in hopes of being on stage one day.  Even though Sarah is nine years older than Mia and feels that she has to always protect her little sister, a man came between these two sisters.

Three years after that fateful holiday, both sisters independently decided to participate in the Jane Austen Festival in Bath.  They had done so in the past, and it was time to move on.  However, unknowingly, the sisters constantly think they are catching glimpses of one another, and have it verified when they end up as dance partners.

The book is written in alternating chapters of the past and the present.   A little bit is revealed in each chapter to get the two sisters together to work things out.  This was done well enough, and in the present you also learn a little more of what their past three have been like as they divulge deep secrets to perfectly strange men.  Thus, this leads to two romances by sisters who fall for different men, and fall in love in less than a week.

I loved A Weekend with Mr. Darcy – it was fun and flirty!  The second book, Dreaming of Mr. Darcy was an alright second book, but this last book in the Austen Addicts series almost seems to have been written by someone else.  I know that the author is British, and it is evident in the first two books, but this novel seems to have been washed of anything British – the speech patterns, the terminology and even how the characters acted seems to have been rather Americanized.  This was a great disappointment.  The conversations were also very stilted and not individualized for the different characters – they all sounded the same – men and women alike.

While it was nice to revisit some of the concepts of Jane Austen’s books, this book felt forced and ill-conceived.  It also seemed as if the author was told to do something with Obsessive Compulsive Disorder (which was seen in another Sourcebook Landmark book, Compulsively Mr. Darcy) – granted, this book did a better job than the other, but still didn’t quite put in to words the true sense of OCD…it was more of an affectation.  The romance also had a certain lack-luster to it.

This book seemed void of much emotion.  When either Sarah or Mia tried to articulate whet they loved about Jane Austen and her novels, I was hoping to find words that describe how I feel about the novels, but it feel short and seemed a rather simple response.  The only passionate response was about reading on a Kindle – and how Mia felt it was not natural to read on an electric reader.  I kept waiting for the humour that is present in most of Miss Connelly’s books – and wasn’t rewarded until the Darcy Wet Shirt contest near the end.

Personally, I would recommend reading A Weekend with Mr. Darcy, and leave it at that.  That book was brilliant and a lot of fun!  Mr. Darcy Forever seemed rushed, forced and a bit sad.  I hope that future books by Ms. Connelly return to her previous humour, wit and romance.

This book was provided by the publisher through Netgalley.com for an honest review.
Favorite Quotes:
Mia was a romantic and wanted to exist in the world where all men were handsome and eloquent and – above all – polite.  Was that too much to ask?

‘Why is life a constant disappointment?’  ‘Because we read fiction,’ Mia said, and Shelley nodded, knowing it was true.

‘Never give up.  If you have a dream – no matter what that dream is, whether it be to become a great actress or to open your very own sweet shop – never stop dreaming it, because if you do, life becomes one long nightmare.’

When I finished this book, I felt: Disappointed – left wondering if the same author who did A Weekend with Mr. Darcy wrote this book.

Rating: 3 stars
Other books to read by this author or theme: A Weekend with Mr. Darcy is a must!  Molly’s Millions was a fun one, but not as wonderful as the aforementioned!
Tag: romance, OCD, sisters, Bath, England
Posted by Kate Maxwell at 7:53 PM
Newer Post Older Post Home