Labels: meme, Thursday
okay... a new meme for me from The Housework Can Wait (don't you just love this blog title? 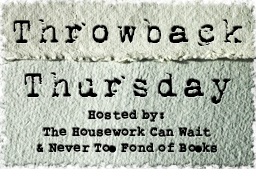 Here’s how it works:
1. Pick any book released more than 5 years ago. Adult, YA, Children’s; doesn’t matter. Any great book will do.
2. Write up a short summary of the book (include the title, author, and cover art) and an explanation of why you love it. Make sure to link back to The Housework Can Wait and Never Too Fond of Books in your post.
3. Link up your post at The Housework Can Wait or Never Too Fond of Books.
4. Visit as many blogs as you can, reminisce about books you loved, and discover some “new” books for your TBR list!

My Throwback is Persuasion by Jane Austen.  Come on, you knew that was coming for my first one! 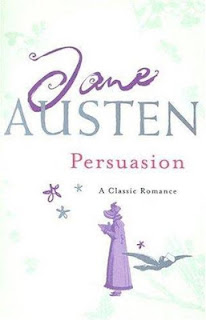 Persuasion was the last novel that Jane Austen wrote, and it happens to be my favorite Jane Austen novel.   She completed this novel in 1816 and it was published after her death in 1817.  A little known tidbit - Persuasion is actually the name that her brother gave to the book, not what Jane had named it.

Basic Summary:  Anne Elliot was persuaded by a family friend to decline an offer of marriage by Frederick Wentworth, who was just entering the Royal Navy, as he had little money and she was the daughter of a baronet.

Fast forward seven years and Captain Wentworth returns to the area.  Anne still has feelings for Captain Wentworth, but it seems that his attentions have been captured by the Musgrove sisters - related to Anne through the marriage of her younger sister Mary to Charles Musgrove (who had also proposed to Anne, but she refused him on her own accord).

Anne Elliot is the sensible sister of the three Elliot girls.  Elizabeth Elliot is just like her father, very much into appearances and her place in Society.  Mary Elliot Musgrove is a bit of a hypochondriac - always imaging herself ill when life is not convenient for her.  Anne also seems to be carried along with the tide around her, allowing herself taken from one situation to another.

However, we soon learn that Anne Elliot has deep feelings, specifically about love and about Captain Wentworth.  But how is she to capture his heart once again with younger girls full of flattery and boisterous personalities are around to distract him?

Why This Book:  What I love about this particular Austen novel is that Anne is so steady and calm.  She has an impossible family that she is trapped with, and has an inner strength that is tested again and again.  She has held true to her feelings for the man she fell in love with when she was but 19 years old.  She hopes silently that he feels the same, but she does not force the issue.

This story also contains the most romantic letter written by Captain Wentworth to Anne.  I love that this is a story about love that endures time.


“I can listen no longer in silence. I must speak to you by such means as are within my reach. You pierce my soul. I am half agony, half hope. Tell me not that I am too late, that such precious feelings are gone for ever. I offer myself to you again with a heart even more your own than when you almost broke it, eight years and a half ago. Dare not say that man forgets sooner than woman, that his love has an earlier death. I have loved none but you. Unjust I may have been, weak and resentful I have been, but never inconstant. You alone have brought me to Bath. For you alone, I think and plan. Have you not seen this? Can you fail to have understood my wishes? I had not waited even these ten days, could I have read your feelings, as I think you must have penetrated mine. I can hardly write. I am every instant hearing something which overpowers me. You sink your voice, but I can distinguish the tones of that voice when they would be lost on others. Too good, too excellent creature! You do us justice, indeed. You do believe that there is true attachment and constancy among men. Believe it to be most fervent, most undeviating, in F. W.

I must go, uncertain of my fate; but I shall return hither, or follow your party, as soon as possible. A word, a look, will be enough to decide whether I enter your father's house this evening or never.”


Some have likened the story to a retelling of Cinderella.  Others say that it stands out because it was written, and not re-written like either of her two most famous novels - Pride and Prejudice, as well as Sense and Sensibility.  I have found that Persuasion is the best written of all of her novels.  Little known fact about me... I have at least three print versions of this novel (and three different electronic ones - just in case one doesn't open) - it is the only book I have read at least three times, and I cannot tell you how many times I have watched the movie!


If you have not read this book, I urge you to!  It is the shortest of Jane Austen's novels, and it is highly romantic, with wit, intelligence and strength thrown in!