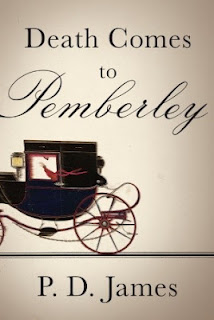 Title by Author: Death Comes to Pemberley by PD James
Series (if applicable): none
Publisher: Knopf
Publication Date: December 2011
Page Count:  291
Source: library Overdrive account (kindle version)
Blurb: It is 1803, six years since Elizabeth and Darcy embarked on their life together at Pemberley, Darcy’s magnificent estate. Their peaceful, orderly world seems almost unassailable. Elizabeth has found her footing as the chatelaine of the great house. They have two fine sons, Fitzwilliam and Charles. Elizabeth’s sister Jane and her husband, Bingley, live nearby; her father visits often; there is optimistic talk about the prospects of marriage for Darcy’s sister Georgiana. And preparations are under way for their much-anticipated annual autumn ball.

Then, on the eve of the ball, the patrician idyll is shattered. A coach careens up the drive carrying Lydia, Elizabeth’s disgraced sister, who with her husband, the very dubious Wickham, has been banned from Pemberley. She stumbles out of the carriage, hysterical, shrieking that Wickham has been murdered. With shocking suddenness, Pemberley is plunged into a frightening mystery.

My Interest in this book is: A Jane Austen spin-off by a well-known mystery writer… do I need more of a reason?

My Review:
While it was fun to visit Pemberley, I was a bit disappointed with this story.  It was nice to see that Elizabeth and Darcy were doing well, with two children.  Jane and Bingley lived down the road so that they could visit often, with or without their own children.  We already knew that Lydia Bennet married Wickham, who still cannot get a job.  Surprisingly, Mary Bennet made a match before Kitty did, and Mrs. Bennet will not visit Pemberley, if she can avoid it, as she feels rather intimidated around her son-in-law.

Georgiana Darcy still lives at Pemberley and is ready for marriage; but whose hand will she accept?  That of long time guardian, Colonel Fitzwilliam, now heir to his father’s estate, or the frequent visiting friend of Charles Bingley, a Mr. Henry Alveston, London barrister?  Georgiana is quite taken with Mr. Alveston, and it doesn’t hurt that he is rather wealthy himself, as well as considerably younger than the Colonel.  However, the Colonel hopes to have Georgiana’s hand in marriage.

We then have Lydia arrive at the doorstep of Pemberley before the large ball, shrieking that her dear Wickham is dead by the hand of Captain Denny.  Darcy starts to mount a rescue mission, which is quickly taken over by Colonel Fitzwilliam, who arrived on horseback right after Lydia did.  Why was the Colonel out so late on a stormy night, and arriving after the carriage containing Mrs. Wickham?

There is supposedly a mystery surrounding a certain portion of the woods of Pemberley – ghosts and suicide in the area of a cottage that now contains the Bidwell family.  Who is the lady in shadows that haunts the wood?

This story was well-written, with a bit of wit, but I felt cheated on several levels.  The most important level is that of the mystery.  I felt that the mystery was not very well-played, especially considering that a venerate mystery writer wrote this story.  Was it simply because her publisher wanted to jump on the Austen wagon to the stars, hoping to get readers from across the two very different genres?  The second was the opening of the story and the piecemeal effect of the writing.  The first six percent of the book was a complete rehash of Pride and Prejudice.  There were other parts that it felt as if Ms James was trying to give the reader a load of information about Jane Austen works, without skillfully working it in to the story.

What I did love about the book was the language.  I had learned a great many new words reading this novel, and I do appreciate a writer that uses words that are uncommon.  However, I feel that she did use a few phrases that might not have yet been in use at the time – police is on that comes to mind.  Ms James does write well – if not know how to spin a mystery well.  This reader fell for many of the descriptions of the people in the story.  The author did try to emulate Jane Austen in describing a person – not with outright “she was a pretty girl with blonde hair and blue eyes” – but more of a description of character:

With his square leather bag strapped to his saddle, he was a familiar figure in the roads and lanes of Lambton and Pemberley.  Years of riding in all weathers had coarsened his features but, although he was not considered a handsome man, he had an open and clever face in which authority and benevolence were so united that he seemed destined by nature to be a country doctor.

Not only were there nods to Jane Austen, as this book seems to be derived from many years of enjoyment of Miss Austen’s novels, but I also detected a nod to other writers, particularly Oscar Wilde with the following quote (reminds me of The Importance of Being Earnest):

I have never approved of protracted dying.  It is an affectation in the aristocracy; in the lower classes it is merely an excuse for avoiding work.  [I have] never gone in for prolonged dying.  People should make up their minds whether to live or to die and do one or the other with the least inconvenience to others.
- From a letter by Lady Catherine de Bourgh

The majority of the book was spent on awaiting the inquest of Wickham for the death of Captain Denny, and then the trial of Wickham for the murder of his friend.  The story never developed that gothic sense of the haunted woods and the murder by a smug man.  It was more of a plodding story moving from the discovery of Wickham over the lifeless body of his friend to his trial and how Wickham was still smug while facing a jury for murder.  I never got the sense that there was a mystery in this story, simply a story of a trial with no evidence truly put forth.  It was one of those stories that had wrapped up the trial and the real story within a small percentage of the novel.  I have never read a book by PD James, and I am not likely to do so in the future.

Favorite Quotes:
You discuss what Miss Darcy should do as if she were a child.  We have entered the nineteenth century; we do not need to be a disciple of Mrs. Wollstonecraft to feel that women should not be denied a voice in matters that concern them.  It is some centuries since we accepted that a woman has a soul.  Is it not time that we accepted that she also has a mind? – spoken by Henry Alveston

A brutal murder on one’s own property by a brother by marriage with whom one is known to be at enmity will inevitably produce a large congregation, including some well-known invalids whose prolonged indisposition had prohibited them from the rigours of church attendance for many years.

When I finished this book, I felt: Let-down; I had expected more of a mystery, not a book about a trial of a man which I could care less if he hanged for a crime that he may or may not have committed.

Other books to read by this author or theme: there are so many other books with Jane Austen mysteries, two authors in particular that do a much better job are Carrie Bebris and Stephanie Barron.