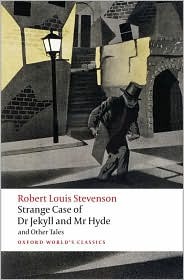 Stevenson's famous exploration of humanity's basest capacity for evil, The Strange Case of Dr. Jekyll and Mr. Hyde, has become synonymous with the idea of a split personality. More than a morality tale, this dark psychological fantasy is also a product of its time, drawing on contemporary theories of class, evolution, criminality, and secret lives.

I very much enjoyed this classic and am sorry I hadn't read it sooner.  I have seen movies and plays based on this story, but after finishing this novella, they did not do the book justice!  It is an intriguing Victorian tale of the duality of man, and how the doctor was able to unleash his darker side with, what he thought at first, little effect to his normal, staid self.  However, it seemed as if the darker aspect of him had taken control at random and had destroyed his life.

I quite enjoyed the first part of the story with Mr. Utterson, walking around with Mr. Enfield and their banter as they were talking about a particular door, and the strange goings-on behind that door.  Then the story of Dr. Jekyll and Mr. Hyde came out.


"Men have before hired bravos to transact their crimes, while their own person and reputation sat under shelter.  I was the first that ever did so for his pleasures.  I was the first that could plod in the public eye with a load of genial respectability, and in a moment, like a schoolboy, strip off these lendings and spring headlong into the sea of liberty.  But for me, in my impenetrable mantle, the safety was complete.  Think of it - I did not even exist!"

I would highly recommend this quick and insightful read to everyone.  It is a classic for a reason and an interesting look at the duality of man.

Quick note about this novella:  It was first published in 1886 - "Stevenson had long been intrigued by the idea of how personalities can affect a human and how to incorporate the interplay of good and evil into a story."
Posted by Kate Maxwell at 8:18 AM
Newer Post Older Post Home