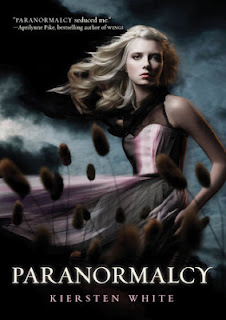 Title by Author: Paranormalcy by Kiersten White
Series (if applicable): Paranormalcy series, book 1
Publisher: Harper Teen
Publication Date: 2010
Page Count:  335
Source: library
Blurb: Weird as it is working for the International Paranormal Containment Agency, Evie’s always thought of herself as normal. Sure, her best friend is a mermaid, her ex-boyfriend is a faerie, she's falling for a shape-shifter, and she's the only person who can see through paranormals' glamours, but still. Normal.
Only now paranormals are dying, and Evie's dreams are filled with haunting voices and mysterious prophecies. She soon realizes that there may be a link between her abilities and the sudden rash of deaths. Not only that, but she may very well be at the center of a dark faerie prophecy promising destruction to all paranormal creatures.
So much for normal.

My Interest in this book is: I have read a few reviews about this, but one really made me want to read it, stating that it was a book that poked fun of paranormal stories.

Evie, or Evelyn, has spent most of her life living in a center for the containment of paranormals, or the IPCA.  Her best friend is a mermaid, and she is routinely sent out to ‘bag and tag’ various paranormals that are threatening society.  Faeries transport her to where she needs to go, and werewolves provide protection, just in case her pink taser fails to take down a vampire.  Evie wonders what it’s like to be a normal teenager.  More than anything, she wants to be like the kids in Easton Heights – a tv show about teenagers in high school… all Evie wants is a locker!

No one knows why Evie is different, but she is a very important asset to the Internationl Paranormal Containment Agency in that she can see through ‘glamours.’  A glamour is a paranormal’s ability to appear like everyone else; Evie has the ‘joy’ of seeing through these and she is usually disgusted by what she sees.  She is frequently sent out to identify various paranormals so they can be tagged and neutered, and the encounters she has can be rather amusing.  (Love the scene with Steve the vampire!)

Evie is a typical teenager, but not allowed to live as such.  Her every move is tracked, she can only travel out of the center with a faerie, and one seems to have quite a thing for her.  She usually doesn’t get to be outside during the day, as most of paranormals are only out at night.  But being a human teenager, she starts to rebel a bit, especially after an unidentified paranormal breaks in to the center.  Evie has never seen anything like him and is intrigued by Lend.

I love how normal Evie seems – she is very much a teenager, and is trying to figure out what is going on around her.  She’s fascinated by the new guy, and tried to steal in to his room whenever she can.  She is also trying to keep the faerie, Reth, away from her, even though he seems rather intent on ‘possessing’ her.  She would love to have a mother, but the director, Raquel, is as close as a mother comes to Evie.  I also enjoyed how Evie read every one of Raquel’s different sighs to mean something.  (Made me wonder if my kids do that subconsciously!)  I enjoy a book that has different characters that actually act differently from one another.

What really made this book for me was the humour as well as the different premise.  Unlike most paramormal books that take themselves way too seriously, this one almost made fun of them.  Vampires are scary gross guys under hottie glamours, and the only thing to do with them is to tase them and slap a bracelet with holy water on their ankles.  But there were so many other things going on than just neutering vamps – there is something out there killing other paranormals, and why did this shapeshifter break in to the center… most paranormals want out!  There is a budding teenage romance with all of the teenage-y stuff thrown in.  The characters are true to life (well, paranormal? life) and the dialogue had me laughing my way through the story.

Favorite Quotes:
I sighed.  I hate the vamp jobs.  They think they’re so suave.  It’s not enough for them to slaughter and eat you like a zombie would.  No, they want it to be all sexy, too.  And, trust me, vampires?  Not. Sexy.  I mean, sure, their glamours can be pretty hot, but the dry-as-bone corpse bodies shimmering underneath?  Nothing attractive there.

The gremlin made straight for me, a rabid gleam in its eyes.  It leaped into the air and I kicked out hard, sending it sailing down the hall, right into the arms of the containment worker chasing it.  “Goal!” I shouted.  Dang, I was good.

Of course, once I thought about that, it really wasn’t any of the paranormals’ faults.  It’s not like hags woke up one morning and thought, hey, wouldn’t it be fun to eat children?  They were like vultures.  Sure, they were disgusting and horrible, but that’s just what they were.

When I finished this book, I felt: Amused!  It was so nice reading a book that didn’t take paranormals seriously!  Can’t wait to read the next one!
Rating: 4 Stars
Other books to read by this author or theme:  Looking forward to finishing this series… it’s very amusing, well written, and an interesting story.
Tag: paranormal, humour, romance, teenager, mysery
Posted by Kate Maxwell at 9:51 AM
Newer Post Older Post Home