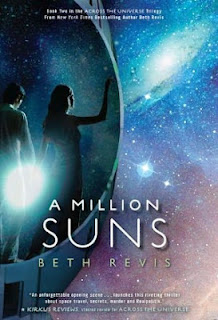 Title by Author:  A Million Suns by Beth Revis
Series (if applicable): Across the Universe
Publisher: Razorbill
Publication Date: January 2012
Page Count:  386
Source: library
Blurb: Godspeed was once fueled by lies. Now it is ruled by chaos. It’s been three months. In that time, Amy has learned to hide who she is. Elder is trying to be the leader he’s always wanted to be. But as the ship gets more and more out of control, only one thing is certain: They have to get off the ship.

My Interest in this book is: It is the second in a series – I really enjoyed ‘Across the Universe’

My Review:
This was a nice middle book for the series and I am looking forward to the last book.  A Million Suns deals with Elder taking over as leader of Godspeed – while simultaneously having stopped the drugging of the masses.  This leads to revolt among the ship’s denizens and Elder is having a hard time controlling the population.  I have to give Elder credit for sticking to his convictions in the way he rules.

While the threat of mutiny is palpable, Amy and Elder are tracking down clues to figure out the great mystery from Orion, while terrorist acts are taking place on the ship.  There is a lot of action in this story, as well as intrigue.  Everyone is affected by the denizens no longer being on the opiate Phydus, and the large ship is suddenly too small for the 2000 occupants that have lived abroad this ship for a couple of centuries.

Once again, I enjoyed the aspect of the storytelling where alternate chapters are told from the point of view of either Amy or Elder.  One telling aspect of Elder is that he insists being called ‘Elder’ and not ‘Eldest’ – since he is the leader of Godspeed.  Those you thought were good guys, are no longer, and what you thought was known, isn’t.  Without giving too much away, it is decided that it is time for those who desire to leave the ship will do so.  And thus waiting until 2013 for the conclusion of the Across the Universe series.

I enjoyed how quick of a read this story was, as well as the different plots all woven together to make for a complex story.  It is an interesting dichotomy to have complex yet quick.  Yes, it could have gone more in-depth with concepts, but I remind myself that this is a Young Adult book that brings politics and the question of free-will to the younger generations.  It is written in such a manner that the reader can see both sides of the argument, and yet see why the characters have chosen the paths that they have.

Favorite Quotes:
I remember the first time I saw the stars.  I thought they changed everything.  I thought they changed me, like I’d become a different person just by seeing shining specks of light a million miles away.  Now when I stare at them, I feel nothing.  I don’t believe in them anymore.  When I first told everyone on the ship that I was giving them the freedom to be themselves, I took those interested in seeing the stars – the real stars – here.  Some came.  Far fewer than I’d expected.  And then I realized: when you’ve lived your entire life within ten square miles surrounded by steel, it’s easier to forget the outside.  It makes it less painful to be trapped on a ship if you tell yourself it’s not a trap.

I remember the first time I saw real stars, through the hatch window.  They were beautiful then, but now, seeing them here, all around me, beautiful feels like an inadequate word.  I see the stars as a part of the universe, and having spent my life behind walls, suddenly having none fills me with both awe and terror.  Emotion courses through my veins, choking me.  I feel so insignificant, a tiny speck surrounded by a million stars.

When I finished this book, I felt: Satisfied with another good story and pleased that I had read this one.  Now I really cannot wait until the last book comes out to see what awaits Amy and Elder, and the other denizens of Godspeed.  It will be interesting to see if another perspective comes in to play in the last book or not.
Rating: 4 Stars
Other books to read by this author or theme: Across the Universe by this author, but no others that I know of in this genre – but have enjoyed it.  I hope to see more like this in the future!
Tag: sci-fi, YA, free-will, politics, population control
Posted by Kate Maxwell at 1:02 PM
Newer Post Older Post Home