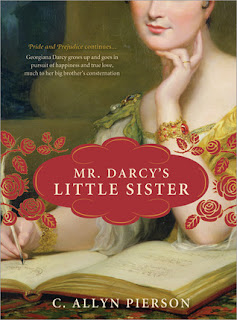 Title by Author: Mr. Darcy’s Little Sister by C. Allyn Pierson
Series (if applicable): none
Publisher: Sourcebooks
Publication Date: 2010
Page Count:  480 pages
Source: won from an Austen blog quite some time ago…
Blurb:
Darcy and Elizabeth have found their happily ever after - now it's Georgiana Darcy's turn! Joining her brother and his new bride, Elizabeth in London is a dream come true for the shy, sweet Georgiana Darcy. Eager to learn to negotiate polite society from her graceful and composed new sister-in-law, Georgiana is ready to make her entrance into the matchmaking and intrigue filled ballrooms of London. Making her way through the sea of rogues and fortune hunters, Georgiana will make the transition from being simply Mr. Darcy's little sister to a confident young woman with her own engaging story to tell.
Review:
This was a fun read about Georgiana Darcy and her getting ready for her first London Season.  I really enjoyed how Georgiana comes into focus during this story, and it was very delightful seeing Elizabeth and Darcy interacting as newlyweds.  This story was done with taste and well written.
Georgiana Darcy is at first nervous about the upcoming nuptials of her dear older brother, Fitzwilliam Darcy to Miss Elizabeth Bennet; she is worried that Elizabeth would not like her, nor that she will bring honour to her brother in her actions.  These fears are quickly negated when she does meet the Bennet family and is encouraged to be at ease by Elizabeth herself.
Also weighing on her mind is her upcoming Presentation at St. James Place before the Prince Regent himself, not to mention the countless balls and soirees that she is expected to attend during her first Season in London.  Will she ever find a young gentleman who will love her for herself, and not her very large dowry?  Will Mr. Jonathan Walker prove to be worthy of her affections?  Do either of the Blake brothers find Georgiana attractive, and not just for her money?
I quite enjoyed watching Georgiana grow through the many experiences that she has, and the various encounters that she has.  Elizabeth turns out to be a very encouraging sister that Georgiana never had, to whom she can turn to ask questions about the feelings she has.  Elizabeth also forms a bridge between brother and sister, helping her ever-changing, quite smitten husband.
The characters are quite well-drawn.  Though it is not exactly in the tone of Jane Austen, it has a delicious flavor for any who are looking for a good continuation story of Pride and Prejudice, as well as seeing Georgiana Darcy growing up.  The vocabulary in the story was very good (as I learned a few new words myself).  I really liked how Elizabeth and Darcy were portrayed, even the few times we saw Caroline Bingley, she seemed true to form.
I quite enjoyed the story until they went to London.  Here, the story seemed to have taken elements from romance novels that I have read in the past.  If it weren’t for the fact that I knew I had never read this before, I could have sworn that I had.  It was a bit predictable with a certain scene, and then to be followed up with a scene that seemed taken from another romance novel.  I am sure that there are several general themes that romance novels follow, and the second half of the book seemed to take these different elements and hastily throw them in there for a few plot twists.  This is where the book lost my interest.  The beginning of the novel had great potential to be written in the style of Jane Austen, then quickly became a romance novel with the general theme of “How do I make him love me?”
There were also a few issues that were introduced that involved Darcy and his cousin, Colonel Fitzwilliam, but seemed to have been forgotten along the timeline, and hastily included as a wrap-up.  About the time that I was really wondering if the author would get back to them, those topics were re-introduced and dealt with quickly.
It was nice to visit the Darcys and the Bingleys and watch Georgiana grow.  I enjoyed the diary entries of Georgiana to get a quick and concise segment on her feelings.  I quite enjoyed how Ms. Pierson brought in events that were current at the time, as well as a few characters from The Scarlet Pimpernel – that was quite fun!  The story was a fun and quick read and it was a pleasure to see Georgiana grow up a bit, and find her happily-ever-after.
Favorite Quote:
“I, on the other hand, have no desire to marry a spoilt child who will throw away his patrimony and my dowry on gambling and dissipation.”
“Well, I would not want to pressure you into marriage that distasteful to you.”
“Excellent.”
Rating: 4 Stars
Tag: Jane Austen, Pride and Prejudice, Georgiana Darcy, London Season, Regency
Posted by Kate Maxwell at 6:43 PM
Newer Post Older Post Home