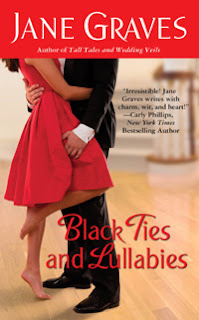 Title by Author: Black Ties and Lullabies by Jane Graves
Publisher: Forever Publishing
Publication Date: June 28th, 2011
Page Count:  400 pages
Source: netgalley.com for review
Blurb:
A good girl can be bad for one night...
Bernadette Hogan doesn't make mistakes. Not when it comes to caring for her mother, and not at her job protecting Texas's most eligible—and infuriating—bachelor. Maybe that's why she's overcome with guilt after one tiny indiscretion: a passionate fling with her boss that's left her confused, intrigued...and pregnant.
but can a bad boy be good for a lifetime?
To self-made millionaire Jeremy Bridges, women are like fine wine: if held for too long, they sour. But one wild night with Bernadette changed all that. She makes him laugh, she makes him think, and soon she's going to make him a father. For the first time, Jeremy wants to be a one-woman man. So how can he convince the fiercely independent Bernadette he's ready to change from partying playboy to dependable dad—and become the loving husband she deserves?

Review:
This book started out as a strong 4-4.5 star book, but went downhill halfway through and ended at the 3-3.5 star range.  I liked how it started with a very strong female character…Bernie Hogan is how I could picture our daughter who wants to go in to the Marines… tough and doesn’t put up with anyone’s BS.  She’s cool under pressure and gets the job done…until Jeremy Bridges turns his laser beam eyes in her direction.  However, pregnancy seemed to have melted her tough-girl exterior, and the story begins to sag from that point.  The story was well written and captivating at first.  I enjoyed the bantering between Bernie and Bridges and enjoyed the ‘oil and water’ of their relationship.  There were strong and quirky secondary characters that were enjoyed when they popped on to the scene.
Jeremy Bridges is a self-made man who got himself out of the slums and into a mansion building a software firm.  He’s Bill Gates, but better looking, and someone who wants to buck the system…just a little.    He goes to philanthropic functions to not only earn his business a tax write-off, but to also find the next Bimbo of the evening.  Bernie can no longer take it, and when Bridges doesn’t heed her advice, she quits…but not before getting pregnant by the same man she loathes.
When Bernie does find out she’s pregnant, she has every intention to not let Bridges have any say in the child’s upbringing.  But Jeremy wants a chance to be the father his dad never was.  It’s a push-and-pull relationship that leads to the squishy mud in the middle of the tug-o-war pit and the story seems stuck in that same mud.
There are parts that are cute and quirky, but I would have liked to see Bernie stay tough, even though the hormones are raging and the baby is kicking!  I would have liked to have seen Jeremy grow and change in more of the book, not in the span of three pages.  I think a lot of the story was pushed out of the book, and wrapped up in too neat of a package for the type of story that it started out to be.  I kept reading quickly, to see what might be the next ploy used as an interaction between Jeremy and Bernie.   I would have liked to have seen more interaction with Max – Bernie’s comrade-in-arms over the years, and I think that Bernie should have spent more time with Lawanda to have her play such a large role near the end of the story.
If you are looking for a fun and quick beach read, this would be perfect for that.  If you don’t mind a hard-as-nails woman go all soft with pregnancy and a stuck-up guy who is nice all of the sudden, this one is for you.
Favorite Quote:
They were looking at a pregnant woman, and the very idea of it short-circuited their brains.
Rating: 3 stars
Tag: contemporary, romance, Texas
Posted by Kate Maxwell at 6:02 PM
Newer Post Older Post Home