Twenty Questions About Me and My Books
I grabbed this fun questionnaire from Living, Learning, and Loving Life.  What a cool Idea!  So...here goes....
1. Which book has been on your shelf the longest? I would have to say Russians by Hedrick Smith.  It’s been on our bookcase since college…too long ago.  I don’t know why, but it has survived several purges!  Sentimental reasons, I guess?!

2. What is your current read, your last read and the book you’ll read next? Right now I am reading The One That I Want.  I just finished The Alchemist and the next one I will probably pick up is Yours To Keep.

3. What book did everyone like and you hated?   I wasn’t a big fan of To Kill a Mockingbird.  It is on so many people’s favorite list, but it really didn’t gel for me.

4. Which book do you keep telling yourself you’ll read, but you probably won’t? This is a tough question.  It might be The Poisonwood Bible.  I actually started to read it, but it didn’t grab me, and there aren’t enough hours in the day to read books that you cannot get in to.  I know so many people have read it and loved it… guess I am not like so many others! (truer words …)

5. Which book are you saving for “retirement?”  I don’t have a specific book that I am saving for ‘retirement.’  I have no idea what my tastes will be like then!  I hope, though, that I will be able to be on a beach and read there!

6. Last page: read it first or wait till the end? I am not like Harry in When Harry Met Sally and read the last page because I don’t know if I will die before finishing a book.  If I am dying… the last thing I will be thinking about is how a book ends!  Definitely in the ‘Wait till the End’ camp on this one!

7. Acknowledgements: waste of ink and paper or interesting aside? I have to admit that I like reading the acknowledgements.  Most of the time, it’s a skim if it just seems like a list of names.  But there have been some funny acknowledgements, plus it gives a glimpse into the author a bit… if it has been done creatively!  (I plan on having fun acknowledgements when I write a book… something along the lines of thanking Ben and Jerry’s Phish Food to help me get through a tough part of the book, or something like that!)

8. Which book character would you switch places with? Tough question.  First of all, I would only want it to be a temporary switch… and not because of Mr. Darcy, either.  (Give me Captain Wentworth….anyway, I digress).  I think that I would like to switch – for a short while – with Elizabeth Bennet in Pride and Prejudice.  She’s smart, she’s witty, and she gets to walk through the English countryside without cows or sheep in the fields, and she loves reading!  Plus, she traveled, as well as attended balls… that would be fascinating to me!

9. Do you have a book that reminds you of something specific in your life (a person, a place, a time)? Richard Bach, writer of Illusions and One.  These books remind me of our ‘early’ years with my husband.  He had me read Illusions which started interesting conversations, and we read One and the follow-one books together…one of them in the car, where we were so engrossed in the reading that we were pulled over for speeding.  Luckily, all of us were buckled, and we had three cute little girls in the back of the minivan…when we explained what was going on, we were told to pay attention to the speed limit and let us off with a warning!

10. Name a book you acquired in some interesting way. Nothing really comes to mind for this question.  I did receive a French dictionary as a gift and the card was written in French…telling me to look under the French word for ‘money.’  There I found a $50!  Pretty cool for a teenager! 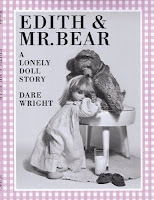 11. Have you ever given away a book for a special reason to a special person? I haven’t given away one of my personal favorite books.  But I did order one specifically for my niece for her 5th birthday!  It was a copy of my favorite childhood book!  Edith and Mr. Bear

12. Which book has been with you to the most places? I would have to say the copy of Persuasion that my mom gave to me several years ago.  I have not only taken it to each of our moves, but will occasionally put it in my purse or bag and just carry it around with me.  It is my favorite of Jane Austen’s and it was a special gift from my mom!

13. Any “required reading” you hated in high school that wasn’t so bad ten years later? If I hated it then, there is NO way I will be picking it up to read now!  For instance… you will NOT find me with a copy of The Lord of the Flies and you will find me actively telling people to NOT read it!

14. What is the strangest item you’ve ever found in a book? Cannot think of anything that I have found personally, but our girls have found some cool things.  One was a ‘Qutar’ monetary bill.  There was also a letter found in a book in Oxford about a writer who had ‘recently’ passed away…in the 1960’s, I think.

15. Used or brand new? If I can read it, it doesn’t really matter to me.  I am not one of those that has to have a pristine book (thus the library is a great place to get books to read), but I am also not one of those that wants old books with everyone else’s notations throughout the book.  What others have written in a book is rather distracting to me!

17. Have you ever seen a movie you liked better than the book? Yes… Julie and Julia.   I LOVED the movie…hated the book (too much vulgarity…glad that cut that out of the movie!)

18. Conversely, which book should NEVER have been introduced to celluloid? The Cat in the Hat… crazy, I know, but the movie ruined the book for me!

19. Have you ever read a book that’s made you hungry, cookbooks being excluded from this question? There have been a few mystery series that focus/center on food that I have enjoyed…and wanted what they were making.  Cannot think of any titles off of the top of my head though.  I heard that Under the Tuscan Sun was supposed to be like that!

20. Who is the person whose book advice you’ll always take? Not sure that I would go off of any one person’s advice.  There are people I follow on GoodReads, and I value their opinion on books.  If they had panned a book that I had in my TBR pile… I would probably not pick it up unless I was desperate for something to read…or really wanted to anyway…knowing what they had said about it!  Isn’t that a wonderful thing about being human?  We are all so different!
Posted by Kate Maxwell at 11:02 AM
Newer Post Older Post Home