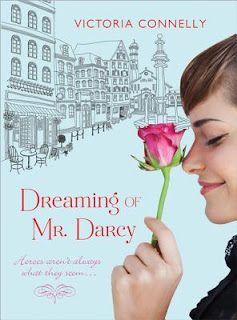 Title by Author:  Dreaming of Mr. Darcy by Victoria Connelly
Series (if applicable): Austen Addicts #2
Publisher: Sourcebooks Landmark
Publication Date:  January 2012
Page Count:  352
Source: Overdrive Account from Library (cool!)
Blurb:
Fledging illustrator and Darcy fanatic Kay Ashton settles in the seaside town of Lyme to finish her book, The Illustrated Darcy, when a film company arrives to make a new adaptation of Jane Austen's Persuasion. Kay is soon falling for the handsome bad boy actor playing Captain Wentworth, but it's the quiet screenwriter Adam Craig who has more in common with her beloved Mr. Darcy. Though still healing from a broken heart, Adam finds himself unexpectedly in love with Kay. But it will take more than good intentions to convince her that her real happy ending is with him.
My Review:
Dreaming of Mr. Darcy is the story of Kay Ashton who inherited a sizeable amount of money and bought an old bed and breakfast in Lyme Regis, home of Jane Austen’s Cobb and Persuasion.  Now, all she needs is Captain Wentworth to walk in the door.  Which happens shortly after room renovations are done, as the movie of Persuasion is being filmed in front of Wentworth House, Kay’s new venture in the world of bed and breakfast.  In walks Oli Wade Owens, the newest Captain Wentworth, and his fellow actors, due to a catastrophe at the B&B they were staying in, they needed a new place to stay.  Winks and smiles quickly turned Kay’s head in the direction of Oli, as she was immediately startstruck.  But what about the compassionate screenwriter and producer Adam Craig?  Since he is so shy, he would be a great partner to the equally quiet and shy Anne Elliot, played by actress Gemma Reilly; or so Kay Ashton thinks and tries to put forward.
This next addition of Austen Addicts has two Jane Austen novels rolled in to one: Persuasion that is being filmed, and Emma that is being played out, with Kay as Emma, trying to matchmake, and not really seeing what is going on around her.
I loved how Kay was able to buy a run-down bed and breakfast and still had adequate funds to completely renovate the place (said with tongue-in-cheek).  It was almost too whimisical in the way that it happened.  There was no, “Let’s borrow some money, and keep my inheritance to pay the bills until the inn was successful.”  It reminded me a bit of Molly’s Millions, in which a young lady came into a large amount of money and drove around England giving away money, and not thinking very straight.  This story was unlike the first in Austen Addicts: A Weekend with Mr. Darcy, which I adored!  And which was very humourous…this current one was not.  Kay was a bit adolescent in her daydreams which would take her away from reality all too often.
My favorite characters were Gemma, Nana Craig and even Adam.  I really wanted to keep smacking Kay, but I guess that is how one feels while reading Jane Austen’s Emma.  I also wanted Adam to be a little more forthright and stop the insanity of Kay misunderstanding him.  She did have her ‘ah-ha’ moment at the end, but only after Frank Churchill left her behind with no explanation.
I wanted to see more of Gemma and how things ended up working out for her.  I know that she was not supposed to be a big character, but, once again, after A Weekend with Mr. Darcy, I expected to see how her story wrapped up as well.
It was a fun read, and it truly made me want to go to Lyme Regis (which I didn’t have a chance the first time I was in England…) and experience that seaside town.  But I felt that this story was done hastily and could have been wrapped up a little better.  Some of the characters were larger than life (Oli and Beth) and others you wished would have grown a bit more of a spine.  But it was nice to visit the world of Jane Austen, if briefly.
Favorite Quote:
Did Jane Austen ruin lives by giving people false expectations about love?  Where her heroes just too good to be true?  Could a real man of flesh and blood ever hope to live up to such paragons?  And were books with happy endings cruel?  Did they give their readers a warped view of the world and what they could expect from it?
Rating: 3 stars
Tag:  contemporary, Jane Austen, Lyme Regis, Persuasion, Emma
Posted by Kate Maxwell at 1:05 PM
Newer Post Older Post Home