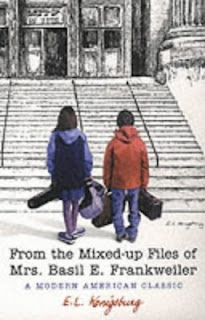 Title by Author: The Mixed Up Files ofMrs. Basil E. Frankweiler by e.l. konisburg
Series (if applicable): none
Publisher: Scholastic
Publication Date: originally, 1967
Page Count:  162
Source: library
Blurb: When suburban Claudia Kincaid decides to run away, she knows she doesn’t just want to run from somewhere, she wants to run to somewhere — to a place that is comfortable, beautiful, and, preferably, elegant. She chooses the Metropolitan Museum of Art in New York City. Knowing her younger brother Jamie has money and thus can help her with a serious cash-flow problem, she invites him along.

Once settled into the museum, Claudia and Jamie find themselves caught up in the mystery of an angel statue that the museum purchased at auction for a bargain price of $225. The statue is possibly an early work of the Renaissance master, Michelangelo, and therefore worth millions. Is it? Or isn’t it?

Claudia is determined to find out. Her quest leads her to Mrs. Basil E. Frankweiler, the remarkable old woman who sold the statue, and to some equally remarkable discoveries about herself.

My Interest in this book is:  I first heard of this in Dash andLily’s Book of Dares.  When I found out it was written in 1967, I thought it was perfect for part of my very own reading challenge category “It’s My Birthday” (uh-oh…I guess the gig is up…now you know how old I am!).

My Review:
I remember Lily recounting this story in the book Dash and Lily’s Book of Dares and how she said that didn’t compare to what she remembered as a child.  However, as an adult, I quite enjoyed this story and am saddened that I didn’t know about this little gem until now.  I would have loved to had read it as a kid and even more so, to read it to our children when they were younger.  I definitely know what I am gifting when our girls have kids!

As mentioned, this is a little gem of a book.  Claudia is feeling over-used and under appreciated at home as the eldest child and a girl.  She’s tired of doing dishes all of the time and wants adventure in her life…as well as make her parents appreciate her more.  Claudia is one who does not like messes or anything unplanned, so she decides to run away to New York City, specifically to the Metropolitan Museum of Art in Central Park.  She also decides that her brother, the next oldest, is the one who will be her companion.  Lucky she chose James, as he was a load of money!


It’s a cute story that is highly improbable but a ton of fun.  Claudia and James arrange a system of staying nights in the museum and going out in to the city during the day for food, when they are not a part of a “school group” in the museum and enjoying blending in.  these two youngsters pulled off quite a shenanigan!  However, there is a new statue in the museum, and there is quite a mystery that surrounds it.  This, more than anything, preoccupies Claudia, and she must solve the mystery of The Angel.

It was fun to read about the year of 1967b in New York City – the year I was born.  It was also fun to watch these two young children hiding away, and trying to be more than what they are!  I would highly recommend it to anyone, but most especially if you have young children, to read this book to them.  I think it would be fascinating to watch young children hear this story.  I found that I looked forward to getting back to this story.  It is written as a letter to a lawyer (it took me a few times at the mention of ‘Saxonberg’ to get that one).  It also has a little bit of mystery and a bit of a twist at the end.  A fun book and worthy of the awards that it has won.  If you have young people in your life, this would be a great book to give.

Favorite Quotes:
And so they went to bed. But lying in bed just before going to sleep is the worst time for organized thinking; it is the best time for free thinking.  Ideas drift like clouds in an undecided breeze, taking first this direction and then that.

“I think you should learn, of course, and some days you must learn a great deal.  But you should also have days when you allow what is already in you to swell up inside of you until it touches everything.  And you can feel it inside you. If you never take time out to let that happen, then you just accumulate facts, and they begin to rattle around inside of you.  You can make noise with them, but never really feel anything with them. It’s hollow.”

When I finished this book, I felt: Very glad I had found this gem.  I only wish I knew of it sooner.  But knowing about it now is still a wonderful thing!
Rating: 5 stars
Other books to read by this author or theme: no idea… looking for suggestions!
Tag: middle grade, adventure, mystery, knowing yourself, being something more
Posted by Kate Maxwell at 7:13 PM
Newer Post Older Post Home