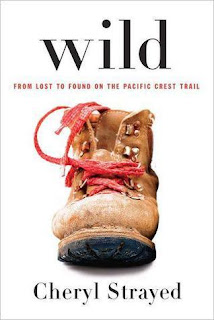 Title by Author: Wild by Cheryl Strayed
Series (if applicable): none
Publisher: Knopf
Publication Date: June 2012
Page Count:  311
Source: library e-book
Blurb:
A powerful, blazingly honest memoir: the story of an eleven-hundred-mile solo hike that broke down a young woman reeling from catastrophe—-and built her back up again.

At twenty-two, Cheryl Strayed thought she had lost everything. In the wake of her mother's death, her family scattered and her own marriage was soon destroyed. Four years later, with nothing more to lose, she made the most impulsive decision of her life: to hike the Pacific Crest Trail from the Mojave Desert through California and Oregon to Washington State—-and to do it alone. She had no experience as a long-distance hiker, and the trail was little more than “an idea, vague and outlandish and full of promise.” But it was a promise of piecing back together a life that had come undone.

Strayed faces down rattlesnakes and black bears, intense heat and record snowfalls, and both the beauty and loneliness of the trail. Told with great suspense and style, sparkling with warmth and humor, Wild vividly captures the terrors and pleasures of one young woman forging ahead against all odds on a journey that maddened, strengthened, and ultimately healed her.

My Interest in this book is: Saw a blurb about it right after watching The Way with Martin Sheen and hiking El Camino in Spain.  I thought that this might give me more insight into long-distance hiking.  Loved the cover, too!

My Review:
When Cheryl got divorced from a man that she loved, but cheated on, she was able to choose her last name; she chose Strayed: “to wander from the proper path, to deviate from the direct course, to be lost, to become wild…” This new last name was a moniker she carried because she felt lost and gone from the proper path.  Cheryl needed to be found!

This book was more than just a recount of her journey of hiking 1100 miles along the Pacific Crest Trail, it was all of the drama that led to her taking a hike that she was quite ill-prepared for.  However, you have to give this woman kudos for completing the hike, in not quitting, and in losing all of her baggage by the end of the trail and ready to start a new life.  It was like a trial by fire to be able to pass in to the next phase of her life, but hers was a trial by trail.

I know that there are people out there who are lost in their lives.  They do things that are harmful to themselves, mess up good relationships with bad choices and it is amazing that they even survive.  Cheryl Strayed did more than survive, she conquered her past and was able to move forward with change.  This is the tale of that journey.  It is more about the emotional journey than the physical one – as she was healing the scars from her former life, the trail attacked her body along the way.

I enjoyed the story, if for nothing else than learning more about long distance hiking.  Silly me, just like her, I thought that you just put on your hiking shoes and walked about 14 miles a day.  But when you hike on a trail like the PCT, you have to carry absolutely everything you need for survival – and there are several days in between towns where she was able to get more provisions.  I found myself constantly shaking her head in amazement at how ill-prepared she was, and how she found herself hiking with only two pennies to her name for over a hundred miles.  It came down to sheer perseverance on her part, and it is a pretty amazing feat that she had accomplished.  Here I was thinking that if I could make it through Basic Training, I could make it through anything; this story certainly changed my mind about that.

There were various emotions throughout a story like this.  The sadness of her mother dying, and dealing with an aging horse (that scene was hard to read!) There was humor in her encounters with various creatures along the trail (MOOSE!) There was also fear, fear of the unknown, the quiet and the creatures (animal and man) that stalked.  She came across kindness and meanness along the way, and still continued forward!

I am glad that I read this story.  It was a good narrative of her journey, with lots of personal drama thrown in.  There were times that I was hoping for more on the scenery (and less about the history of an area) as I grew up in Oregon and had been in many of the places she had mentioned and the heart-stopping, awe-inspiring and sheer beauty of the Cascade Mountains.  (The video clip below has a few pictures that she took along the way.)  Wild is definitely the story of a woman who strayed from her path, but found herself along the Pacific Crest Trail.

Favorite Quotes:
I’d set out to hike the trail so that I could reflect upon my life, to think about everything that had broken me and make myself whole again.  But the truth was, at least so far, I was consumed only with my most immediate and physical suffering.

It had only to do with how it felt to be in the wild.  With what it was like to walk for miles for no reason other than to witness the accumulation of trees and meadows, mountains and deserts, streams and rocks, rivers and grasses, sunrises and sunsets. The experience was powerful and fundamental. It seemed to me that it had always felt like this to be a human in the wild, and as long as the wild existed it would always feel this way.

When I finished this book, I felt: Glad I had read it, if nothing else but as a cautionary tale of hiking long distances in shoes too small and a pack too heavy – with NO experience whatsoever!
Rating: 3 stars
Other books to read by this author or theme: Watch the movie, The Way, with Martin Sheen.
Tag: self-discovery, memoir, Pacific Crest Trail, hiking