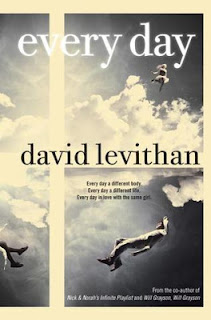 Title by Author: Every Day by David Leviathan
Series (if applicable): I hope so…
Publisher: Knopf Books for Young Readers
Publication Date: August 2012
Page Count:  336
Source: library ebook
Blurb: Every day a different body. Every day a different life. Every day in love with the same girl.
There’s never any warning about where it will be or who it will be. A has made peace with that, even established guidelines by which to live: Never get too attached. Avoid being noticed. Do not interfere.
It’s all fine until the morning that A wakes up in the body of Justin and meets Justin’s girlfriend, Rhiannon. From that moment, the rules by which A has been living no longer apply. Because finally A has found someone he wants to be with—day in, day out, day after day.

My Interest in this book is: I had seen it around on the blogosphere, and thought the cover was cool, and liked the premise of the story

My Review:
WOW! It has been a few weeks after finishing this book and all I can say is WOW! Every Day is a book that follows ‘A’ who wakes up in a different body and a different life every day! A is someone who is comfortable as a boy or girl, has no hang-ups on same sex or heterosexual relationships, but just relationships.  But the story is way more than that.  It is a story that will touch on drug addiction, deep depression, and loss of a family member, love, and obesity.  At times I felt like I was reading a Star Trek, Next Generation story; but it was much deeper than that. A had always believed that he should not vary a person’s routine because it was not his place to take over the person’s life, because what difference would one day make, after all?


But one day is all it took for A to fall in love with the girlfriend of the first guy we are introduced to in A’s bizarre existence. A is able to access feelings and information from his ‘host.’  It takes time and effort, but he can do it.  We are first introduced to A as Justin, a jerk of a guy who is messy and cranky.  He goes to school and senses the girlfriend hovering off on the side.  A is struck by the sadness and yet hope that is within this girl. A accesses and realizes that Justin hasn’t been the best of boyfriends, and A throws his ethical compass out the window, and does something that the host would not do.  This begins the story where we pick it up.

What struck me more than anything about this story is the ability of the author, David Leviathan, to capture different existences – truly capture them.  Many times I would have my mind blown by how he put in words the depths of depression that one girl felt, or the love A felt when he met Rhiannon, or what it was like to be in a body of a girl who was a real b*tch!  Religion is touched on, and I can see how some people would be bothered by Leviathan’s pithy synopsis of religion.

Everybody wants to believe in a higher power. Everybody wants to belong to something bigger than themselves, and everybody wants company in doing that. They want there to be a force of good on earth, and they want an incentive to be a part of that force. They want to be able to prove their belief and their belonging, through rituals and devotion. They want to touch the enormity.
It’s only in the finer points that it gets complicated and contentious, the inability to realize that no matter what our religion or gender or race or geographic background, we all have about 98 percent in common with each other. Yes, the differences between male and female are biological, but if you look at the biology as a matter of percentage, there aren’t a whole lot of things that are different. Race is different purely as a social construction, not as an inherent difference. And religion – whether you believe in God or Yahweh or Allah or something else, odds are that at heart you want the same things. For whatever reason, we like to focus on the 2 percent that’s different, and most of the conflict in the world comes from that.
The only way I can navigate through my life is because of the 98 percent that every life has in common.

This is the only existence that A ever knew.  A would wake up in a body, male or female, but always the same age that he is. (It is strange to use a pronoun for A as A is comfortable in either a girl or boy, but for sanity’s sake, we will stick with ‘he’.)  A never knew differently, he just accepted it, until he met Rhiannon.  How could he be with her? Could she be with him, once she knew what A was, regardless of the body that he was in?


The story is set up that each chapter is a different day in a different body.  Some chapters may be several pages long, and there have been a few that are only a few sentences. After A met Rhiannon, he would ‘kidnap’ the body he was in to get to her if it was at all possible.  This became a test for Rhiannon and if she could love a different body every day, even though the person driving the body was the same.

The other aspect of this book was the side story of Nathan, one of the boys that A inhabits so that he can spend an evening with Rhiannon.  Nathan, for one reason or another, remembers having his life hijacked! He wants answers, which leads A trying to find out more about himself as well.

This story was amazing, and I highly recommend it to anyone who wants to have their mind blown away by many concepts, pithily summarized; it is definitely a book that makes you think.  I enjoyed this book from start to finish and cannot wait to get a copy and have my family read it, and then I read it again!  I enjoyed the refreshing style of David Leviathan, his ability to be incisive, and the interesting twists that occurred in this story.

If there’s one thing I’ve learned, it’s this: We all want everything to be okay.  We don’t even wish so much for fantastic or marvelous or outstanding.  We will happily settle for okay, because most of the time, okay is enough.


Favorite Quotes: There were so many from this book, that is why I added some of them above.
Normal people don’t have to decide what’s worth remembering. You are given a hierarchy, recurring characters, the help of repetition, of anticipation, the firm hold of a long history. But I have to decide the importance of each and every memory. I only remember a handful of people, and in order to do that, I have to hold tight, because the only repetition available – the only way I am going to see them again – is if I conjure them in my mind.

I feel such a tenderness for these vulnerable nighttime conversations, the way words take a different shape in the air when there’s no light in the room. I think of the rare jackpot nights when I ended the day at a sleepover or sharing the room with a sibling or a friend I genuinely liked. Those conversations could trick me into believing I could say anything, even though there was so much I was holding back. Eventually the night would take its hold, but it would always feel like I was fading to sleep rather than falling.

When I finished this book, I felt: amazed! It was truly a remarkable experience reading this book.
Rating: 5 Stars
Other books to read by this author or theme: I don’t know yet, but looking forward to reading more by this author.  Tempest is a good book, but not anywhere near the caliber of this story.
Tag: YA, love, paranormal, amazing!
Posted by Kate Maxwell at 9:19 AM
Newer Post Older Post Home