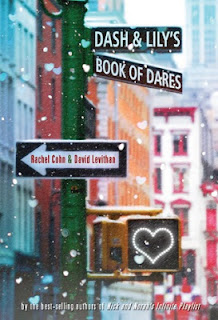 Title by Author: Dash & Lily’s Book of Dares by Rachel Cohn and David Levithan
Series (if applicable): none
Publisher: Knopf Books for Young Readers
Publication Date: October 2010
Page Count:  260
Source: netgalley for UK release
Blurb:
“I’ve left some clues for you.
If you want them, turn the page.
If you don’t, put the book back on the shelf, please.”

So begins the latest whirlwind romance from the bestselling authors of Nick & Norah’s Infinite Playlist. Lily has left a red notebook full of challenges on a favorite bookstore shelf, waiting for just the right guy to come along and accept its dares. But is Dash that right guy? Or are Dash and Lily only destined to trade dares, dreams, and desires in the notebook they pass back and forth at locations across New York? Could their in-person selves possibly connect as well as their notebook versions? Or will they be a comic mismatch of disastrous proportions?

Rachel Cohn and David Levithan have written a love story that will have readers perusing bookstore shelves, looking and longing for a love (and a red notebook) of their own
My Interest in this book is: I have seen it around and when I had the chance to read it from netgalley.com I had to take it, especially after reading Every Day by David Leviathan.
My Review:


“I’ve left some clues for you.
If you want them, turn the page.
If you don’t, put the book back on the shelf, please.”

I was ready to turn the page, and I was very glad that I did.  This was a delightful story of two teenagers home alone in NYC for Christmas.  Dash was wandering through one of his favorite spots in New York, as he was well read, and seemed to spend so much time in the world of literature.  When he went in to the bookstore, The Strand, to see if there was an older edition of one of his favorite books, he noticed a red moleskin stuck between the books with no writing on the spine.  Out of curiosity, he pulled it out and had no idea what an adventure he had before him.

Lily and her older brother, Langston, were left home while their parents went to Fiji for a very late honeymoon.  Langston talked Lily in to leaving the moleskin so that she could have a little adventure and see if it was a way for her to meet a guy, as well as get out of her comfort zone.

Little did either of them realize what an adventure was ahead for either of them.  To figure out the puzzle that was set before them in the notebook, and then to execute that dare, Dash and Lily sent one another around New York during the holidays to one another’s favorite places, as well as within themselves.

Even though they had not met one another, Dash and Lily had no compunctions about baring their souls to the other through the journal and the questions that they posed on the pages with seeming anonymity.  Could it be an adventure to lead to true love, or were they destined to only be friends through a red moleskin notebook?

I loved how this book was written.  David Leviathan started his chapter, and then passed it on to Rachel Cohn to respond, and send David’s Dash on the next quest for the notebook.  What a great concept, a story written in turn between two authors, and it was very well executed.  Their writing styles were perfectly matched, and the characters were so true and human.  I was definitely part of the journey of the notebook between these two characters and constantly hoping that Dash and Lily would take the next dare to see where it brought them, and if they ever were to meet.  There were also two wonderful side characters, Dash’s best friend, Boomer and Lily’s Great Aunt both stole the scene when they were on the page.

This was a well-written, and quite fun, story.  It takes two people who are alone for the Holidays around the town that they love, and show it to one another.  These same two people reflect on themselves because of a question posed by the other.  It was a delightful story that captured two teenagers looking for something outside of themselves.

Favorite Quotes: so many of them!  Here are a few highlights…
It is possibly true what Grandpa’s buddies have repeatedly told me: Teenage boys cannot be trusted.  Their intentions are not pure.  This must be part of Mother Nature’s master plan – making these boys so irresistibly cute, in such a naughty way, that the purity of their intentions becomes irrelevant.

Because you know when a cow chews grass? And he or she chews and chews and chews? Well, green tea tastes like French-kissing that cow after it’s done chewing all that grass.

I meant that the love I felt for him was huge and real, and, while painful, it forever changed me as a person, in the same way that being your brother reflects and changes how I evolve, and vice versa.  The important people in our lives leave imprints.  They may stay or go in the physical realm, but they are always there in your heart, because they helped form your heart.  There’s no getting over that.
When I finished this book, I felt: very glad I had the chance to read this story, especially during the holidays… a perfect time to read Dash and Lily’s Book of Dares.
Rating: 4 stars
Other books to read by this author or theme: Every Day by David Leviathan – which I highly recommend.
Tag: YA, holidays, dares, heart-felt
Posted by Kate Maxwell at 5:56 PM
Newer Post Older Post Home