review: Smart Girls Get What They Want


First, I want to apologize for taking so long to get this out!  What a fabulous book!! Thanks again to the author for asking my opinion! 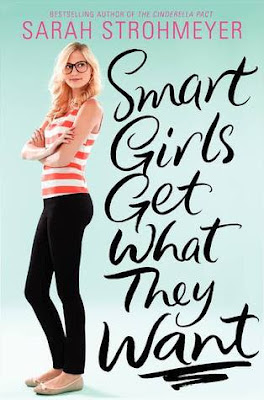 Title by Author: Smart Girls Get WhatThey Want by Sarah Strohmeyer
Series (if applicable): none
Publisher: Balzer + Bray
Publication Date: June 26th 2012
Page Count:  352
Source: the author, Sarah Strohmeyer – Thanks Sarah!
Blurb: Gigi, Bea, and Neerja are best friends and total overachievers. Even if they aren't the most popular girls in school, they aren't too worried. They know their "real" lives will begin once they get to their Ivy League colleges. There will be ivy, and there will be cute guys in the libraries (hopefully with English accents) But when an unexpected event shows them they're missing out on the full high school experience, it's time to come out of the honors lounge and into the spotlight. They make a pact: They will each take on their greatest challenge--and they will totally "rock" it.

Gigi decides to run for student rep, but she'll have to get over her fear of public speaking--and go head-to-head with gorgeous California Will. Bea used to be one of the best skiers around, until she was derailed. It could be time for her to take the plunge again. And Neerja loves the drama club but has always stayed behind the scenes--until now.

These friends are determined to show the world that smart girls really can get what they want--but that could mean getting way more attention than they ever bargained for. . . .

My Interest in this book is:  I love Sarah Strohmeyer.  I read the Bubbles books, but I loved The Cinderella Pact and The Sleeping Beauty Proposal even more!  I was very excited to get my hands on this one, as I happen to have Three Smart Girls as daughters!

My Review:
I love Sarah Strohmeyer and how she can make me laugh!  When I saw that this book was coming out, I really wanted to read it, as I wanted to see how Smart Girls got what they wanted.  The story is of three best girl friends, who all happen to be smart and at the top of their class academically.  It is told from Gigi’s point of view, and a very humourous point of view it is.  “My parents broke up before I was born, though since they’re both scientists, I’ve long held suspicions that I’m indeed an alien.”  One night, the three girls were at Neerja’s house and were checking out her older sister’s room, where they found Parad’s year book (which she claimed she never received) and after reading what other people wrote in her year book (“You seemed really nice,” or, “Who are you?”) these three girls decided to make something of themselves at school, besides being the super smart ones that nobody knew.

Events unfolded, and Neerja tried out for the school play, Bea joined the school’s ski team, and Gigi ran for Student Rep of the school board.  This book is about facing your fears and getting what you want.  These three sophomore students set out to make a name for themselves.  While Gigi was the only one who was recognized by the majority of the student population because she ran for a school office, all three girls found what they wanted.  Each girl was quirky in her own right and it was a pleasure to read.

I appreciated how each character was different from one another.  Each person had his or her own voice, mannerisms and misconceptions about other people.  It was nice to see Gigi learn, even though she’s a pretty smart cookie.  This is a story about smart girls wanting to have more in their lives than just studying, and actually doing something about it – taking chances, and not necessarily getting exactly what they thought they wanted, but liking what they ended up with instead.

At first I had a problem with Gigi spending time with hair and make-up, and then I thought about some of my smart friends who did this as well.  (I didn’t care what I looked like, if people didn’t like me for who I am then I didn’t need them in my life!)  I also felt that they weren’t quirky enough to be the super smart girls in school – they were quiet girls who were really good in academics.  But they are teenagers who have decided to have a better schooling experience and took it upon themselves to change the way things were going for them.  I have to give them props for that!  I hope that this gives other smart girls an idea and that they go out there and try to make the best of high school years.  While high school is quite awkward, trying to make it more palatable is the best thing that any smart girl can do!

There were several things that I loved about this book, humour being the most important!  I love how I laugh out loud with Sarah Strohmeyer books!  But Smart Girls was a little different than all of the other teen books out there.  The cutest guy doesn’t win the smartest girl.  The smart girl finds out that she has a lot to learn!  I really enjoyed the fact that Gigi had faults, and the main one was what any person has – judging people before knowing them.  I appreciated the fact that Gigi learns – she learns that sometimes you get what you need, not what you think you need.  Gigi learns to stand by her friends instead of letting boys get in the way.  She also learns that jocks can be smart.  I really liked the fact that Gigi grew up a bit.  I also liked the fact that Neerja learned about cute boys versus smart boys as well.  I definitely saw myself in these three girls, and now I wish I can have a do-over for high school, and that I had signed up for the school newspaper or yearbook!  (Tried the play thing and the singing thing – I was given the ‘fish’ in chorus and told not to sing!)  But I was involved in what I loved to do – dance – as well as all of the honors classes.

I hope that smart girls are smart enough to pick up this book!  I hope that the title grabs their attention and they read this book about three friends who stick by one another to help them succeed, as well as go for what they want.  One of our own smart girls read this, even though she wasn’t in to ‘modern’ stories – and she loved it.  She mentioned that particularly liked how it didn’t turn out the way you thought it would, and she also liked all of the twists in it.  She read it reluctantly at first (is it just another teen book, Mom?) – and then couldn’t help herself!  It was a pleasure to see her curled up on the couch with a small smile on her face (rare, indeed), reading Smart Girls and really enjoying it!

Favorite Quotes: There were so many that I highlighted while reading this.  Gotta love a Kindle for that feature!  But here are the top…. Three?!

From that moment on, we became the best of friends, united in our defiance of meanies and our love of each other and all things sweet.

“But being smart isn’t everything.”  “It should be.  You must watch out, Gigi.  It is often tempting for intelligent girls like yourself to dumb down just to get boyfriends.  What a pity so many boys are put off by a girl’s intelligence.”
Because high school only comes around once, and I would hate to look back and think I didn’t make the most of every moment because I was scared of what other people thought.  Other people never think that much about you anyway.  Eleanor Roosevelt said that.

“That’s the upside of dating cute-but dumb guys.  You can insult them right to their faces and it goes straight over their heads.”

When I finished this book, I felt: …very glad I had a chance to read this book.  It was a fun – and SMART – YA book.
Rating: 4.5 Stars
Other books to read by this author or theme: The Cinderella Pact and TheSleeping Beauty Proposal.
Tag: teen, romance, high school, achieving, friendship
Posted by Kate Maxwell at 9:44 PM
Newer Post Older Post Home