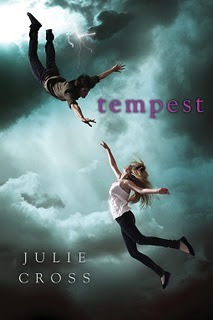 Title by Author: Tempest by Julia Cross
Series (if applicable): Tempest #1
Publisher: St. Martin’s Griffin
Publication Date: January 2012
Page Count:  334
Source: netgalley.com
Blurb:
The year is 2009.  Nineteen-year-old Jackson Meyer is a normal guy… he’s in college, has a girlfriend… and he can travel back through time. But it’s not like the movies – nothing changes in the present after his jumps, there’s no space-time continuum issues or broken flux capacitors – it’s just harmless fun.

That is… until the day strangers burst in on Jackson and his girlfriend, Holly, and during a struggle with Jackson, Holly is fatally shot. In his panic, Jackson jumps back two years to 2007, but this is not like his previous time jumps. Now he’s stuck in 2007 and can’t get back to the future.

Desperate to somehow return to 2009 to save Holly but unable to return to his rightful year, Jackson settles into 2007 and learns what he can about his abilities.

But it’s not long before the people who shot Holly in 2009 come looking for Jackson in the past, and these “Enemies of Time” will stop at nothing to recruit this powerful young time-traveler.  Recruit… or kill him.

Piecing together the clues about his father, the Enemies of Time, and himself, Jackson must decide how far he’s willing to go to save Holly… and possibly the entire world.
My Review:
Tempest by Julia Cross is an intelligent, young adult novel that deals very well with the concept of time travel, and delves in to quantum physics (but doesn’t call it that)!  It is the story of Jackson Meyer and his new-found ability to jump back in time for a few minutes at a time, but whatever he does in the past has no effect on the present…. Yet.
Jackson luckily has a geeky best friend in Adam, who is very scientific about the process.  Adam has Jackson keep a journal about these experiments as they try to figure out what is happening with Jackson and his new power to time jump.    There is also Jackson’s love interest, Holly, who has no idea what her boyfriend can do, as Jackson and Adam feel it best to not let anyone know about this new phenomenon.  That is, until Holly is shot by strangers that pop in to her room and Jackson makes a jump back to the past that becomes his new ‘home base.’
This story has many wonderful twists and turns, much emotion that Jackson reviews with his jumps into the past, and many mysteries that are thrown at the reader, and not all of them answered yet.  Jackson learns more about his father, and it each little bit of information shocks him.
I really enjoyed all of the characters and how they developed.  It was nice to see the relationship between father and son grow, as secrets were shared and Jackson was able to understand a little bit more about what was happening to him, and why.  I loved Holly and her swinging pony-tail, her strength of character and her willingness to comprehend her situation and move forward.
I found this well-written and rather deep for a young adult book.  I would recommend it for older (minded) teens, as there are some intimate parts between Jackson and Holly.  There is a bit of humour, but what I enjoyed most about Tempest is that it is an intelligent story written for thinkers, who are willing to try to wrap their head around time travel, which is usually hard to describe, by Julie Cross did a very good job in getting the point across.
There are forces of Good and Evil, but it’s hard to tell which side is what, and I am sure that more information will be forthcoming in future books in this trilogy.  I am looking forward to learning more about the Tempest Project, the Enemies of Time, about Jackson learning to control his power better, and what does happen in the future… and what time line they will end up in.  This was a wonderful story, and I am looking forward to the rest of the series.  I am also looking forward to the movie, as this book is visually stunning just reading it, it would be fun to see how it translates to the screen.
Favorite Quote:
The very millisecond I felt some part of Holly between my fingers, I forced my mind to focus as we were free-falling.  Think about where you want to be, I told myself.  Beautiful.  Wonderful.  Solid Places.
“Once we figure out what the hell we just did, I may have to drag you to some island a hundred years in the past.”
“And I may have to let you,” she mumbled.
Rating: 4 Stars
Tag: time-travel, contemporary, YA, romance, male-character
This book was provided by the publisher for an honest review.
Posted by Kate Maxwell at 10:18 AM
Newer Post Older Post Home