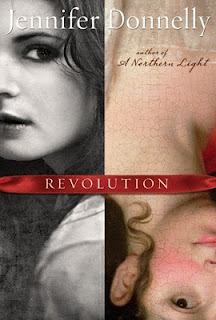 Title by Author: Revolution by Jennifer Donnelly
Series (if applicable): none
Publisher: Delacourte Press/ Random House Teens
Publication Date: 2010
Page Count:  472
Source: local library
Blurb:
BROOKLYN: Andi Alpers is on the edge. She’s angry at her father for leaving, angry at her mother for not being able to cope, and heartbroken by the loss of her younger brother, Truman. Rage and grief are destroying her. And she’s about to be expelled from Brooklyn Heights’ most prestigious private school when her father intervenes. Now Andi must accompany him to Paris for winter break.

PARIS: Alexandrine Paradis lived over two centuries ago. She dreamed of making her mark on the Paris stage, but a fateful encounter with a doomed prince of France cast her in a tragic role she didn’t want—and couldn’t escape.

Two girls, two centuries apart. One never knowing the other. But when Andi finds Alexandrine’s diary, she recognizes something in her words and is moved to the point of obsession. There’s comfort and distraction for Andi in the journal’s antique pages—until, on a midnight journey through the catacombs of Paris, Alexandrine’s words transcend paper and time, and the past becomes suddenly, terrifyingly present.

Jennifer Donnelly, author of the award-winning novel A Northern Light, artfully weaves two girls’ stories into one unforgettable account of life, loss, and enduring love. Revolution spans centuries and vividly depicts the eternal struggles of the human heart.
Review:
Revolution is a fascinating story of a troubled girl from modern day who falls into the past of the French Revolution.  It is a story of Andi who spends a winter break in Paris, researching a musician and trying to create a thesis about musical DNA.  It is also the story of Alexandrine from 1795 who was trying to make a difference in a young boy’s life, a young boy known as the Dauphin.  Music ties these two girls together.  Yet one girl died trying to make a difference in a life, the other is healed through her actions and begins to use her talent to help others.
Andi is a very troubled teen.  She has carried the guilt of thinking she was responsible for the death of her younger brother for two years, and the anti-depressants she takes doesn’t do anything to stop the pain.  Throughout the book, she frequently talks of wanting to stop the pain, and typically is only one step away from doing that.  In addition to her personal anguish, her father left her mother and her to start his own family, as well as immersed in his work as a geneticist.  Andi’s mom is also in pain over the death of her son, and all she does is paint his portrait over and over.
When Andi’s dad shows up at the beginning of winter break during her senior year, his primary purpose is to find out why Andi is failing in school, with the very real threat that she will be kicked out of the prestigious high school because she has done nothing towards her senior thesis.  He quickly assesses the situation – the hundreds of canvases around the house – and determines that Andi’s mom needs to be treated in a proper facility and that Andi herself will have to go to Paris with him during the winter break, with stipulations.  Andi must have the outline and introduction to her senior thesis on Amade Malherbeau, a musician and guitarist from Revolutionary France.
Music is very important to Andi, it helps to quiet her mind and allows her to get lost in it.  I loved how much music played in this story, and even though I have never been musically-minded, it was a very interesting plot device.  Music is key, as it were, to this story, it ties everything together very well.
While Andi is in Paris doing her research, she comes across a diary of a 17 year old girl that was written in 1795.  The diary discusses the Revolution and ties in many interesting facts about Paris and that tumultuous time in France’s history.  The diary is written by Alexandrine who also played guitar, as well as acted.  It is her story and how the Revolution affected her, and what she saw happen in Paris at that time.  I really enjoyed getting lost in Alexandrine’s story.
Ms. Donnelly does an excellent job weaving history in to the story to give the reader an excellent view of the French Revolution.  While hoping that Andi finds her way, I felt for Andi and the pain she was going through.  However, I wished that the adults in her life were a little more clued in to this troubled teen who felt that popping pills was the answer she was looking for, the way to remove herself from the anguish she felt.  I was very thankful for the diary sections of this story, as it went away from Andi and her multiple flirts with death.
Ms. Donnelly did an excellent job at portraying a teenager with issues, but it seemed that some reality was suspended.  However, the historical aspect saved this book for me.  Even though Amade Malherbeau was a fictional character, the concept of musical DNA was a fascinating one.  Also, tying in the French Revolution along with temporal distortions (my Star Trek take – not the author’s), made for a great, though rushed, ending to this story.  I wish that the beginning of the end had actually happened sooner in the story, and had more time dealing with the story of when the worlds collided. (trying not to give away anything… but hard not to…)
As with too many books, it seemed that the end was a bit rushed, but there was closure on many fronts.  The historical bits (my favorite and near and dear to my heart) I would give 5 stars, but Andi’s story and how she so needed help, but adults were clueless, bothered me a bit and that story line earned 3 stars from me.  Balanced out, though, I would give this book a solid 4 stars and would highly recommend it to anyone who wants a little insight into the French Revolution.  If I were an English teacher, or even a History teacher, I would use this modern-day book to help teach that era, with caveats included.  I am sure it would provide for a very interesting discussion.
Favorite Quote:
History is fiction.  Robespierre said that and he should know.  For the last three years, he has written it.  It is my turn now.  These pages you now hold in your hands are no fiction.  They are a truthful account of these bitter, bloody days.  I write them in haste and in hope – hope that by reading what is contained within them, the world will learn the truth.  Because truth will make you free.
Rating: 4 Stars
Tag: contemporary, historical, French Revolution, music, Radioheads, Paris, depression
Posted by Kate Maxwell at 2:24 PM
Newer Post Older Post Home