Review: ARC Say You'll Be Mine 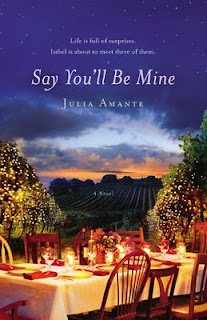 Title by Author: Say You’ll Be Mine by Julia Amante
Series (if applicable): none
Publisher: Grand Central Publishing
Publication Date: Oct 25th, 2011
Page Count:  384
Source: netgalley.com
Blurb:
Isabel Gallegos, owner and CEO of Gallegos Wines is tired of always being responsible. Tending to everyone else's needs before her own has left her divorced, unhappy, and unfulfilled. The winery had been her parents dream, but never hers, though she devoted herself to making it a success. After much thought, Isabel decides to sell the winery, move to the beach, and finally take back her life.
But just as these changes are about to take place, Isabel's cousin and her husband are killed and she becomes the legal guardian to their three young children. Convinced this must be a mistake, Isabel returns to Argentina, intent on finding a more suitable home—and parent—for the kids. But as she spends time getting reacquainted with her family and her past, the decision to return to her own life grows complicated. Should she bring the children home with her, or find a way for them to stay in Argentina? Should she stay with them? Can she really give up her own dream, just as she's about to realize it?

Review:
Say You’ll Be Mine by Julia Amante is a story of Isable Gallegos, a woman who is constantly conflicted with herself and where she is in her life.  Her cousin in Argentina passed away with her husband on a ski trip and left their three children to Isabel.  Isabel is in her forties and has no idea on how to raise children, only how to run a successful winery.  To complicate matters when she returns to her home in Argentina to deal with this situation, her ex-husband, Nick, decides to come along to be there for her emotionally.  He felt that he needed to return the favor, as she was there for him, ten years previously after their divorce when he went through rehab for severe alcoholism.
I instantly fell into the story and got caught up in the tumult of Isabel’s life, her struggle with trying to decide if she should keep the children or not.  The characters are all fairly well-drawn, especially the children.  You get a sense of who they are by their actions.  This was very much a character driven story of a woman who was in a constant battle with herself and what she wanted out of life.  Though, this point seemed to be belabored almost too much.  Yes, we got that she felt put upon by everyone in her life and she did everything for other people, but what has she done for herself.
At this point in the story, Isabel is rather selfish in that her main goal is to sell the winery, buy a small house next to the ocean, and to be left alone, not saddled with three young children she barely knows.  She even makes a deal with her cousin Brenda’s brother-in-law, who demands custody of his brother’s children.  There is a history of distrust between the whole family and Ramiro, the children’s real uncle.  This is one character that is not well-done, even though he is a pivotal character.  Is he arrogant and bossy, or does he has a soft spot for children and truly wants to raise them as his own, in honor of his brother?
The main issue I had with this book was how quickly it was all wrapped up.  All of the sudden, everyone changes their point of view and – bam – it’s over.  There was such a lead-up of character development to then have all of the characters turn on their ear had soured the book slightly.
The story was captivating and fairly well-written.  The characters seemed to be true (until the end), but the constant reminder that Isabel had always done what everyone else wanted, and not followed her dreams, got to be a bit much.  I am still trying to figure out how the title fits in with the story.  A novel of this scope started off promising many different tales of the various characters, but never fully developed many of them.  I had enjoyed this novel, and it would be a perfect beach read despite its few flaws..
Favorite Quote:
But she didn’t have to marry him.  She didn’t have to run the winery for her parents.  She’d chosen to do all that, then blamed everyone else for her unhappiness.  She’d been wrong to let others decide what she should do.
Love grows slowly at first, then exponentially with each smile, with each interaction – happy or sad – until you can’t imagine not having that person in your life.
Rating: 3.5 stars
Tag: contemporary, step-in parenting, choices, winery
This ARC was received by netgalley.com for an honest review.
Posted by Kate Maxwell at 9:30 PM
Newer Post Older Post Home