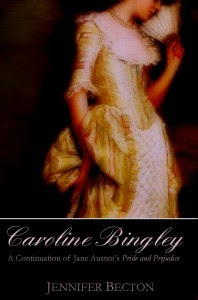 Title by Author: Caroline Bingley by Jennifer Becton
Series (if applicable): Personages of Pride & Prejudice
Publisher: Whiteley Press
Publication Date: October 1, 2011
Page Count:  262 pages
Source: Amazon.com
Blurb:
When Charles Bingley and Mr. Darcy made proposals of marriage to the Bennet sisters at the end of Jane Austen's Pride and Prejudice, Caroline Bingley was both distressed by her brother's choice of bride and humiliated by Mr. Darcy's rejection of her. And she made her objections known.

Now banished from her brother's household, Caroline must return to her mother's home in the north of England until she can make amends with both Bennet sisters. Desperate though Caroline may be to return to polite company, she absolutely refuses to apologize to Miss Elizabeth Bennet, and instead, she seeks an alternative route back into society in the form of Mr. William Charlton, heir to a barony.
Review:


While I absolutely loved Charlotte Collins by Jennifer Becton, I enjoyed Caroline Bingley’s story.  Jennifer stayed true to Caroline’s character from Jane Austen’s Pride and Prejudice.   You still wanted to smack Caroline and tell her to grow up, but she has to find her own way, and Ms. Becton did a very nice job.  I picked up the extended version (the one that contained not only Caroline’s story, but that of Charlotte Collins and a few deleted scenes from Caroline’s story) and wondered why these ‘deleted scenes’ were not included in the original story, as they would have greatly added to the story; not only to have given more depth to the characters, especially Rosemary Pickersgill, but to also ‘explain’ things a little more.
You get a sense, every once in a while, that Caroline is struggling with herself.  She is trying to figure out how to get out of her predicament without having to apologize to Miss Elizabeth Bennet, even though she is already Mrs. Fitzwilliam Darcy.  Caroline felt she did no wrong, so why should she apologize.  The scene in the book with Caroline and Elizabeth Darcy was well done.  I absolutely loved, though, the horse-riding scene.  Knowing that Ms. Becton is an avid horse rider, this must have been fun for her to write!
I felt that some of the characters could have been more fleshed out.  Mr. Rushton was a character who could have had more time on the pages, and to see his feelings grow for the irksome Miss Bingley would have been appreciated.  Many times throughout the story, I wondered if Mrs. Pickersgill would become the love interest of Mr. Rushton, that would have set Caroline on her ear!  Mrs. Pickersgill was an interesting character, and I was waiting for her to walk out on her employment of Miss Bingley.  I thought that the section in the deleted scene, ‘Mr Darcy Explains All’ would have shown more of Mrs. Pickersgill’s fortitude and why she did stay as a companion to Caroline.
While the story was enjoyable, it didn’t have that same ‘palpitation’ that Charlotte Collins did between Charlotte and Mr. Basford.  There were also a few words choices that shocked this reader’s sensibilities in this story.  It almost seemed if the writing style was relaxed a bit after having written Absolute Liabilities (which, admittedly, this reader has not been able to get in to).  Don’t get me wrong, it was a pleasant story, and I am glad that Jennifer Becton had Caroline Bingley keep her true personality and not to have changed instantly when things did not go her way.  It is always nice to see a continuation of Pride and Prejudice that keeps true to Jane Austen’s characters.  Though, this one lacked the tone that was seen in Charlotte Collins, which could have been written by Jane herself!
Favorite Quote:
“Indeed, therefore it is fortunate that you are not the type of woman with whom such men fall in love.  Your attempts at pretense and accomplishments are so very blatant.  Your machinations so transparent.  Most gentlemen would be put off by you and lured by a woman of more subtle arts.”
Rating: 4 Stars
Tag: regency, Jane Austen continuation, romance
Posted by Kate Maxwell at 2:48 PM
Newer Post Older Post Home