review: Skinny Famous and in Love 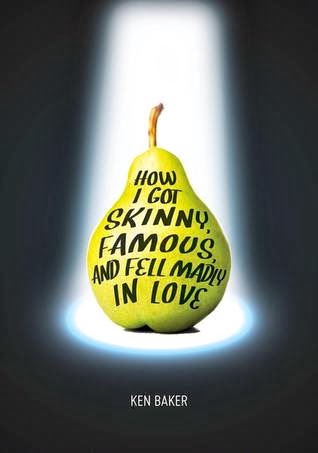 Title by Author: How I Got Skinny, BecameFamous and Fell Madly in Love by Ken Baker
Series (if applicable):  none
Publisher: Running Press Kids
Publication Date:  April 2014
Page Count:  272
Source: netgalley.com
Blurb:  "Thick. Heavy. Big boned. Plump. Full figured. Chunky. Womanly. Large. Curvy. Plus-size. Hefty." To sixteen-year-old Emery Jackson, these are all just euphemisms for the big "F" word—"fat." Living on a Southern California beach with her workout fiend dad, underwear model sister, and former model mother, it is impossible for Emery not to be aware of her weight.

Emery is okay with how things are. That is, until her "momager" signs her up for Fifty Pounds to Freedom, a reality show in which Emery will have to lose fifty pounds in fifty days in order to win the million dollars that will solve her family's financial woes. Emery is skeptical of the process, but when the pounds start to come off and the ratings skyrocket, she finds it hard to resist the adoration of her new figure and the world of fame. Emery knows that things have changed. But is it for the better?
My Interest in this book is:  sounded like a fun read!

My Review:
Emery (named after the emery board one finds in a nail salon) has just been told that she is now considered obese by the family doctor.  Sure, she’s tried diets, but the call of “Coronary Highway” is too strong.  Who wouldn’t want to eat two double cheeseburgers, a large fry and a diet coke (It is, after all, the Standard American Diet)?  Well, everyone in Emery’s dysfunctional family doesn’t eat that way.

Her botox-injecting mom wants to sign up the family up for a reality television show that features Emery losing 50 pounds in 50 days.  Emery wants no part of this because she doesn’t mind who she is.  Her boyfriend, Ben, is a gentle giant, and they are both so not the Highland Beach norm of over-processed humans with their augmented body parts and fake faces.  However, when Emery sees that they are about to be kicked out of their house, Emery realizes that half of the prize money can save the family home.  Emery agrees to be a part of the madness of a reality tv show.

While I found Emery as somewhat vulgar, she was trying to help others at the same time.  You got to see some good insights from a 16 year-old through her vlog posts on self-acceptance. That is one aspect of this book that I quite enjoyed.  I liked how Emery talked about trying to find acceptance because of her weight.  It was empowering what Emery learned along the way about herself and how she shared it with her audience.

However, it is NOT a book I would recommend to young adults due to some of the material in the book.  (I am sure I am living in a bubble, but would like to think that kids under seventeen are still somewhat innocent!)

I don’t watch reality television – never have and never will.  But I get the general concept of it.  One thing that really bothered me about the book (because of Fifty Pounds to Freedom) was the expectation of losing that much weight in so short of a time.  I would hate to see people think that they could do the same thing.  It was completely unhealthy and as we saw in the book, Emery was turning to pills and laxatives to try to achieve the end goal.  The book did not go in to the detriments of how an extremely low calorie diet affects the body and the brain – and then you throw intense exercise on top of that!  Yes, I realize it is a fiction story, but, unfortunately, there are people out there who might try something like that!

The ending also did not tie up the loose ends and was rather ambiguous.  Emery had a chance to set things straight with her self and her family, but she ran away instead.  This reader was left with several questions that went unanswered.  Just like “reality tv,” the story is unrealistic.  There were a few nuggets of truth (which was nice) in a heaping pile of dysfunctionality!  This book premise had great potential, but I feel that it fell short.

This book was provided by the publisher for an honest review.

Favorite Quotes:
“Fat,” I say mater-of-factly. “My brand is Fat.” My answer lingers like one of our dearly departed floppyeared old beagle Sunny’s stinky farts on a hot summer night. More silence. I and the elephant in the room.

“We hide our secrets from the people we love. We hide food in underwear drawers. We hide our bodies underneath clothes. What this show is making me realize is that I don’t want to be a hider anymore. I want to be a show-er.”

When I finished this book, I felt: Mehh – and I hope that the author doesn’t get sued from someone who tries the Freedom Eating plan and ends up with severe problems.
Rating: 3 stars – only because of Emery’s vlog posts – if it weren’t for those, it would be a 2 star book.
Other books to read by this author or theme:  If you are looking for a book that is humorous and helpful with weight loss and self-acceptance, try The Undiscovered Goddess by Michelle Colston.
Tag:  young adult, contemporary, dysfunctional family, reality tv
Posted by Kate Maxwell at 8:54 AM
Newer Post Older Post Home