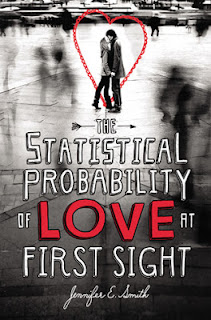 Title by Author: The Statistical Probability of Love at First Sight by Jennifer Smith
Series (if applicable): none
Publisher: Poppy of Little, Brown and Company
Publication Date: January 2012
Page Count:  236
Source: library system
Blurb: Who would have guessed that four minutes could change everything?

Today should be one of the worst days of seventeen-year-old Hadley Sullivan's life. Having missed her flight, she's stuck at JFK airport and late to her father's second wedding, which is taking place in London and involves a soon-to-be stepmother Hadley's never even met. Then she meets the perfect boy in the airport's cramped waiting area. His name is Oliver, he's British, and he's sitting in her row.

A long night on the plane passes in the blink of an eye, and Hadley and Oliver lose track of each other in the airport chaos upon arrival. Can fate intervene to bring them together once more?

Quirks of timing play out in this romantic and cinematic novel about family connections, second chances, and first loves. Set over a twenty-four-hour-period, Hadley and Oliver's story will make you believe that true love finds you when you're least expecting it.

My Interest in this book is: I heard many good things about this book on the book blogosphere…

My Review:
I loved the premise of the book, but the execution left something to be desired.  First of all, I dislike when an author writes in the present tense.  Some authors can pull it off, and you don't even realize that it is happening, but there are some, to include this one, that fails to convince your mind. I also did not buy that these two strangers fell in love in such a short period of time.

I did not fall in love with either character, and could care less about them. (Truth be told, I had forgotten their names promptly after reading the story.)  Hadley was being a typical teenage girl who was rather selfish and unbending.  Regardless of the fact that you are upset that your father is marrying another woman in another country, one would think that they would take the time to see the place they are visiting, instead of flying across an ocean for 24 hours of wedding stuff. Oliver seemed rather dishy and polite, but it truly did not seem as if these two had fallen in love on a seven-hour flight.  I think that the most genuine part of the book was when Oliver kissed Hadley once they got off of the plane and going different directions.

As I was reading this story that was set mostly in London, I wondered if the author had ever been to London.  I was shocked to learn that the author earned her Master’s in Scotland.  You would think that she had to have gone to London a few times, and Scotland it not all that different.  It did not seem to fit the feel of the London that I experienced for a year while living in England.

Favorite Quotes:
“Because that’s what you do on planes. You share an armrest with someone for a few hours. You exchange stories about your life, an amusing anecdote or two, maybe even a joke. You comment on the weather and remark about the terrible food. You listen to him snore. And then you say good-bye.”
“As she drops her backpack, Hadley does a mental tally of all that she packed inside, trying to remember whether she threw in a pen that could be used to capture a phone number or an e-mail address, some scrap of information about him, an insurance policy against forgetting.”
“Someone once told her there’s a formula for how long it takes to get over someone, that it’s half as long as the time you’ve been together. Hadley has her doubts about how accurate this could possibly be, a calculation so simple for something as complicated as heartbreak.
And there on the street corner, it strikes her as something of a miracle that she met him at all. Imagine if she’d been on time for her flight. Or if she’d spent all those hours beside someone else, a complete stranger who, even after so many miles, remained that way. The idea that their paths might have just as easily not crossed leaves her breathless, like a near-miss accident on a highway, and she can’t help marveling at the sheer randomness of it all.  Like any survivor of chance, she feels a quick rush of thankfulness, part adrenaline and part hope.”
When I finished this book, I felt: Glad that it was a quick read.
Rating: 2 stars
Tag: YA, travel
Posted by Kate Maxwell at 6:55 PM
Newer Post Older Post Home