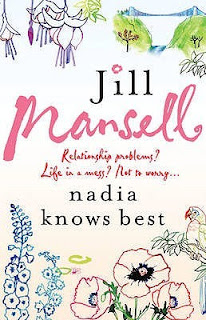 Title by Author: Nadia Knows Best by Jill Mansell
Series (if applicable): none
Publisher: Headline Book Publishing
Publication Date: August 2003
Page Count:  440 pages
Source: netgalley.com
Blurb:
When Nadia Kinsella meets Jay Tiernan, she's tempted. Of course she is. Stranded together in a remote Cotswold pub, with a snowstorm raging outside—let’s face it, who would ever know? But Nadia’s already met The One. She and Laurie have been together for years—they’re practically childhood sweethearts, and she still gets goosebumps at the sight of him. Okay, maybe she doesn’t see that much of him these days, but that’s not Laurie’s fault. She can’t betray him. Besides, when you belong to a family like the Kinsellas—bewitchingly glamorous grandmother Miriam, feckless mother Leonie, stop-at-nothing sister Clare—well, someone has to exercise a bit of self-control, don’t they? I mean, you wouldn’t want to do something that you might later regret.

My Interest in this book is: I have read a few Mansell books before and they are hilarious!

My Review:
Nadia is dating current male model, Laurie, who is actually the boy next door that she was dating and got him in to modeling by signing him up for a modeling shoot almost as a gag!  However, his career took off, and when he flies in for a night or two, he goes straight to Nadia.  Until one night…

Nadia met Jay on a stormy night where she was a very good girl while stranded with him.  At first she thought he was gay, and that was a very amusing scene.  Later, Nadia runs in to Jay and ends up working for him as a landscaper for homes he is renovating, helping her escape a dead-end job at a gardening center.  It has been almost two years since Laurie broke up with Nadia, and Laurie comes back to town wanting a second chance with her.  Nadia isn’t’ sure what to do.

What I loved about this story was the English wit and humour!  Having lived in England for a bit made it easier to understand the places she describes, but it would not lessen the storyline for anyone who has not lived or visited England.  Also, all of her characters have a personality of their own, to include the man who pines for Miriam, Nadia’s grandmother.
There are so many story lines that are going on in this book.  We have Clare, Nadia’s younger sister, who is trying to figure out life and who to love.  There is Tilly, a half- sister to Nadia and Clare, all the same mum, but Nadia’s dad and grandmum are raising her.  She wants nothing more than to see her pseudo-father happy. I truly enjoyed all of these stories that went along with Nadia’s story, and it added to the storyline all the more.  If you had taken these other stories out of the picture, however, there would not have been that much of a story.

This is the perfect book to read on the plane while flying to see family over the holidays.  You will actually find yourself wanting to slip away to read and find out what’s happening next in this story.  How is the chap that is sending those bizarre letters to Miriam?  Why do Nadia and Jay seem to constantly misunderstand one another?  Will Nadia find out the truth about the one who wants her back?  Will Tilly be successful in setting up her ‘dad’?  It’s a fun read that you cannot help but wonder about this crazy family and how everything will turn out for them.  This is actually one of the first books that Jill Mansell had written and re-released, but does not detract from the fun and wit found between the covers.

When I finished this book, I felt: glad that I had picked it up. I love Jill Mansell and this one just proved it even more.

Other books to read by this author or theme: too many to choose from so it would be best to try any that strike your fancy.  If you love British humour, give Jill a chance!
Tag: chick lit, romance, England, sisters
Posted by Kate Maxwell at 9:08 PM
Newer Post Older Post Home