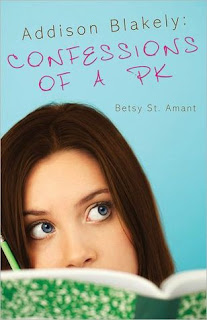 Title by Author: Addison Blakely: Confessions of a PK by Betsy St. Amant
Series (if applicable):
Publisher: Barbour Publishing
Publication Date: Jan 2012
Page Count:  368
Source: netgalley.com
Blurb:
Sixteen-year-old Addison Blakely has tireless played the role of PK—preacher’s kid—her entire life. But after Wes Keegan revs his motorcycle into town and into her heart, Addison begins to wonder how much of her faith is her own and how much has been handed to her. She isn’t so sure she wants to be the good girl anymore. Join Addison Blakely as she attempts to separate love from lust, facts from faith, and keep her head above water in her murky, fishbowl existence.
Review:


While I loved the first two-thirds of this book, the last part crumbled for me.  Addison Blakely is hilarious and very much a teenage girl with a huge crush on the bad boy.  She’s lost her best friend from childhood, due to differences, her dad is dating her teacher, and she somehow volunteered to help run the school Talent Show.  Then, it seemed, that the writer realized that she was writing a Christian novel for teens, and the last third of the book was all about that, tying things up with a neat little bow.
I fell in love with the story and Addison immediately!  She is such a teenager, and the author got it perfectly.  She was dealing with her conflicting feelings of being both a teenage girl with a crush on the bad boy and being the perfect daughter to the town’s preacher.  I love the struggle that Addison goes through, and I love how human she is!  She is funny, intelligent and trying to sort out her feelings.  She is always daydreaming, she carries around Jane Austen in her bag at all times, and she is trying to figure out her place in the life that she lives.

Her mother passed away when she was quite a bit younger, and it has been just her and her dad for years.  She makes dinner, and tries to keep her father from using too much salt on his food, if that’s possible for a sixteen year old girl to do.  However, their relationship isn’t the strongest; they don’t really talk.  It seems that Addison has a great respect for her father, and understands her role in the community by being a preacher’s kid, or PK.  She is always weighing what she does as to how the community will see it.
Then Wes Keegan, an eighteen year old boy who is no longer in school, arrives in town.  For some strange reason, he is often found kissing some girl under the streetlight outside of Addison’s window.  She so wants to be with bad-boy Wes, but knows that it would break her preacher father’s heart.  Wes tempts Addison quite a lot, and she wants nothing more to be a ‘Lemon Drop’ girl… not a Gummi Bear – all soft and squishy.
Then there is Addison’s school life in which she is seen as a teacher’s pet, as she always gets good grades and always has her homework done on time.  She’s a junior in high school, and it seems that all of the sudden, everyone is paying attention to her, except her best friend from grade school.  Throw in a football player who thinks being a dumb jock will win Addison’s heart, which is the cause of the rift between her BFF and her, and life gets a little more interesting.  Then there is the nice kid who has a super crush on Addison, but she just sees him as a friend, but the whole time, I was rooting for Luke!
Luckily for Addison, the foreign exchange student from Germany, Marta, arrives on the scene to help Addison with her many decisions.  Marta is funny as well, and really steps up to help Addison from school projects to boys to her faith.  As mentioned, there is the Talent Show, which this year has a lot riding on it, as they have decided to donate some of the proceeds to a charity that focuses on reading, something that is very dear to Addison’s heart.
It was a fun and quick read, even though I am not into Christian literature.  It was not preachy as first, but it did seem that the author forgot until the end of the story that the religion really needed to be present and focused solely on that at the end.  It would be a great read for any young adult or teenager where faith is important to them.  I thought that the theme of transforming yourself was a good one, but it fell victim to the classic blunder of transforming others.  I am sure that is important to some, and that the subject of the transformation was hinted at all along, it is not right to try to change someone just because his kisses make your knees go weak.  I felt that this was the wrong story line to focus on at the end.  I am glad that things were turning around for this young man, but the whole time I wished that Addison saw another young man in a better light.
Favorite Quote:
Was it possible to have a midlife crisis at sixteen?  Guys like Wes had never appealed to me before.  They just made me want to hand them a button-down shirt and a bottle of hair gel and tell them to get over themselves and lose the drama.
Too sweet?  Ha.  Wes obviously hadn’t seen me PMS-y yet.  I could go toe-to-toe with Poodle Girl and still comes out swinging.  Too bad that Addison only existed once a month.
So once again, I folded my hands in my lap, pasted on a smile, and did what every self-surviving PK learned to do from day one.  Lie.
Rating: 4 stars
Tag: teenage, contemporary, Christian, high school drama, crushes
Posted by Kate Maxwell at 8:10 AM
Newer Post Older Post Home