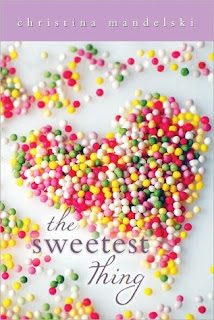 In the world of Sheridan Wells, life is perfect when she’s decorating a cake. Unfortunately, everything else is a complete mess: her mom ran off years ago, her dad is more interested in his restaurant, and the idea of a boyfriend is laughable.
But Sheridan is convinced finding her mom will solve all her problems—only her dad’s about to get a cooking show in New York, which means her dream of a perfect family will be dashed.


Using just the right amount of romance, family drama, and cute boys, The Sweetest Thing will entice fans with its perfect mixture of girl-friendly ingredients.
REVIEW:  It was so refreshing to read a young adult book that didn’t talk down to the reader, nor did it go lightly on some of the family issues that were involved in this book.  Sheridan Wells is known as the ‘Cake Girl’ in her small Michigan town, where she has been working for years in her grandmother’s bakery, making incredible cakes for all of the denizens’ celebrations.  Because Sheridan decorates cakes, as a high school student, she doesn’t have time for many other things, to include being popular in school…one thing she wished she could change only to have the most popular guy in school notice her.

And notice her, he did….once her father was going to be an ExtremeCuisine TV celebrity chef.  Sheridan thought that Ethan, the ‘hot’ guy, finally noticed her for being her…the Cake Girl, even though his (ex)girlfriend is Sheridan’s arch enemy and head cheerleader!  Then throw in the best friend boy friend who wants something more, and we shall see which way the chemistry experiment will go!
The characters are well drawn and seem rather true to life.  I enjoyed Sheridan as she seemed like a real person.  She is a typical teenager, in that she can be frustrating, unwilling to listen to her father, yet still have ‘authoritarian respect’ for him, and also have the emotions of a teenager who is a good girl at heart, but wants to break out a little bit.  She still knows right from wrong, but is trying to figure out what is in her heart.  She also can be single-minded, like so many teenagers I know, and not see the trees because she is only looking at the forest.
Not only do you get hooked on Sheridan and her life, but you fall in love with Mr. Roz, who helps out at the bakery, Nanny, Sheridan’s Texan grandmother and even Father Crowley who softens a bit!  I think that even Sheridan’s dad was true to form…a chef who is driven to make it on to food television, and not necessarily seeing what is going on around him.
Sheridan’s mother left several years before, and it is a driving force throughout the story…Sheridan missing her mother and constantly searching for her.  Sheridan was taught the love of cake decorating from her mother, and would ‘talk’ to her in her mind when she was trying to figure out what a cake was missing.  This story line does progress, and lends to Sheridan growing more as a person.  It was nice to see a character that was willing to listen…even if it took four other people to say the same thing for her to listen.  But, that’s a teenager for you!
I appreciated how this story was written.  It didn’t seem too far-fetched, which is always nice in a book geared towards young adults.  It is a story of family and how that family changes and grows.  It is a little about self-discovery through learning of the past.  The pace is good and the writing style is a little above par in what you see in many teen books today.  Even though it was a young adult book, it was a pleasant character story for adults to read as well.  It was also refreshing to have an ending that didn’t seem rushed and tied up all of the loose ends… and had this reader hoping that everything would be all right!
RATING: 4 STARS ****

Favorite Quotes:
“Your life is yours to make the most of, or completely screw up.  Your choice.”
A fifteen-year-old with a missing mother and a fame-obsessed father, forced into a phony Sweet Sixteen party – could this be any more unnatural?
“You know, a true gift isn’t something you do because it pleases other people.  It’s something you must do because it fills you up inside.”

FTC disclaimer:  I was given this book from Netgalley.com for review.
Posted by Kate Maxwell at 3:47 PM
Newer Post Older Post Home